Why Didn’t They Finish School? It’s More than Meets the Eye 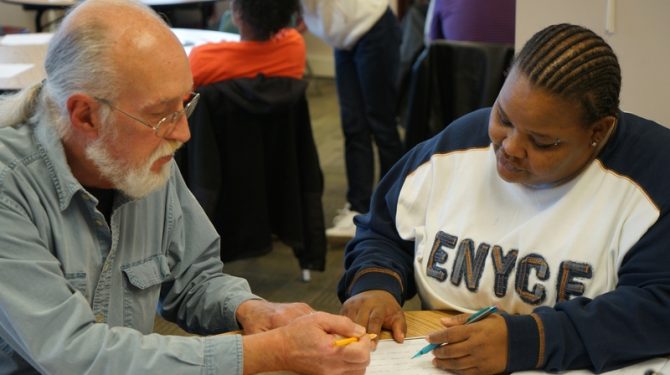 When I retired from teaching, I wanted to do something worthwhile, to reciprocate for my good fortune and to use my teaching skills. I spent my career teaching children with learning disabilities and wanted to work with adults—people who had a deep desire to learn and came to school of their own volition every day. This brought me to Seeds of Literacy.

In the past several years, I have worked with many students and they are always appreciative and friendly. I admire their determination to make a better life for themselves and their children. Many of them are middle-aged and some even older. One woman I tutor is older than I am. When I asked her why she was doing this, she said she just wanted to get a job—at an age when some of us are retiring.

My teaching career was spent in an inner ring suburb of Cleveland, so I am familiar with the struggles and challenges of poverty and lack of education. I dealt with so many families just struggling to get by and school was often low on the list of priorities when compared to paying the rent or feeding their children. Students moved in and out of the district regularly. The lack of stability has a terrible effect emotionally and educationally. The social challenges of making new friends as well as entering into a different curriculum can lead to discouragement and behavior issues. By high school some students were angry and discouraged because school was a place of failure and they could never hope to meet the expectations.

I dealt with so many families just struggling to get by and school was often low on the list of priorities when compared to paying the rent or feeding their children.

I knew single mothers working a third shift and leaving the children with a teenage cousin after school. Students often showed up at school hungry or distracted by a painful situation at home. I taught twin boys who would enter my room visibly upset and focused on each other because of an unhappy interaction at home. One of them was in need of medical intervention for severe asthma but never received it, and his day would be wasted in the clinic.

At Seeds, I overhear conversations while tutoring, and they remind me of the lives of the children I taught. Sometimes it is between the students sitting together at a table. They share their reasons for not completing high school, and it’s eye-opening. In many instances, the decision to leave school was completely out of their control. One day, two young women at the same table told me they were both forced to drop out of high school to watch younger siblings. They didn’t want to leave school then, and now it is so much harder.

One of those women now needs her eldest daughter to watch her younger children when she works. The young teenager may struggle to find time to do her own homework. This mother may have no other option but to work to support her children. Imagine how overwhelming life might be to work, care for a family and study for a GED® at the same time. As a society we expect people to be responsible and move forward, but how many of us realize the obstacles and sacrifices that takes every day?

Another student worked all morning with me on writing a personal story. I learned she had a baby boy when she was seventeen and her family kicked her out. She lived on the streets for eight years “hustling” to take care of her son. She would drop him off at a friend’s house, make some money and buy her friend’s family some food to repay their help. One day her sister went to the babysitter’s, took her son and put him up for adoption. She said, “My reason for living was gone. I didn’t see him again for sixteen years until he found me.” She continued to survive alone for many years and was incarcerated several times. She told me she wanted to make her son and her two grandchildren proud of her by finishing school. But I have not seen her for months and we don’t know why she left. The circumstances that kept her from graduating from high school are probably still there, and making a commitment to education is still difficult for her.

As a society we expect people to be responsible and move forward, but how many of us realize the obstacles and sacrifices that takes every day?

Recently a student shared that he is in his sixties and his children do not know that he never finished high school. In his last semester of high school his mother became sick and made him quit to be “the man of the family.” That set a difficult course for his life. Now retired, he wants to complete his education.

Not everyone has grown up with the same advantages and family support. When I grew up in suburban America, I understood that I would graduate from high school and go to college. There were few, if any, obstacles in my way. My parents helped me with homework and raised me in a safe, healthy environment. I never came home to an empty house or heard gunshots outside my window. I never lacked for basic health care or went to bed hungry. I was never neglected or discouraged from reaching my goals.

I’ve realized where and to whom each one of us is born is pure chance.

What if you were raised with very little guidance or love? I’ve heard teenage mothers say that a baby gives them the unconditional love they’ve never had before. I was born in the middle class and spent my childhood feeling a sense of belonging and love. I did not have to go out and look for it in ways that could be harmful to me.

The students I work with left high school for a variety of reasons. Unfortunately, poverty and the limited options that come with it don’t go away just because someone grew up.
I have seen people come to Seeds of Literacy for months and suddenly disappear. They were attempting to do what our society asks of them even though our society might not fully understand where these adults are coming from and what they’re living with. Giving these adults and their children a chance at a better future benefits all of us. None of us did it alone and neither should they.

Diane Vogel Ferri was a special education teacher for her entire career, retiring from Cleveland Heights-University Heights schools in 2014. She is a published writer and poet, and has volunteered as a tutor with Seeds of Literacy since 2014.