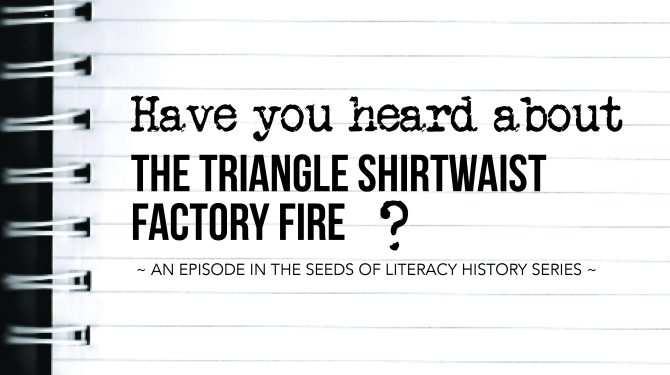 On March 25, 1911, a fire broke out in a bin of fabric scraps on the 8th floor of the Triangle Shirtwaist Factory in New York City. That fire led to the deaths of 146 workers and focused attention on the labor abuses that many Americans faced, with working-class women leading the fight. Seed Site Coordinator Melina Lindsey delves deeper in this “Have You Heard about…” historical segment.

On March 25, 1911, a fire broke out in a bin of fabric scraps on the 8th floor of the Triangle Shirtwaist Factory in New York City. Most workers on the 8th floor were able to escape, and the owners, whose offices were on the 10th floor, were alerted and fled the building. No one told the 200 workers crammed onto the 9th floor.

Onlookers watched in horror as factory employees, most of them women, jumped to their deaths rather than wait for the fire to reach them. They were trapped in a building with an inadequate fire escape that collapsed under the weight of workers escaping the building, and their employers kept all but one door locked, in violation of New York’s safety codes, because they were so concerned about preventing their workers from stealing from the factory. 146 workers died that day. The fire focused attention on the labor abuses that many Americans faced, with working-class women leading the fight.

Before the late-1800s, clothes were mostly made by hand at home or, for wealthy Americans, made-to-order by skilled dressmakers. Clothing was time consuming to produce and expensive to buy, so most Americans only owned a few pieces. The invention of the sewing machine and the factory system changed all of that. Shirtwaists, a kind of blousy, lacy version of men’s button-up shirts, were one of the first fashion trends that were produced in factories, mostly by immigrant women who were paid very little and were often denied basic safety protections. A young woman who worked in a garment factory said of her working conditions, “unsanitary—that’s the word that is generally used, but there ought to be a worse one.”

The Triangle Shirtwaist Factory was owned by Max Blanck and Isaac Harris, known in New York as “the Shirtwaist Kings”. Blanck and Harris didn’t hire their garment workers directly, but instead hired subcontractors who were in charge of their own workers. This system basically allowed Blanck and Harris to keep themselves off the hook for any worker mistreatment that happened in their factory, even though they were profiting off the clothing that was produced there. Many large retailers use similar systems today to keep their hands clean while they pressure factories to produce clothing that is priced too low to pay workers the minimum wage.

The conditions in the Triangle Shirtwaist Factory were similar to many other garment factories in New York. Workers routinely worked as long as 13-hour days, 7 days a week. They could only take one 30-minute break to eat lunch, and, because the factory provided lunches to all 500 employees from the same window at the same time, the women at the end of the lunch line would only have a few minutes to eat their meal. At the end of the workday, all of the employees would leave through the same door and have their purses and bags searched before they were allowed to go home, while the other exits remained locked all day. This focus on protecting the shirtwaists rather than the workers led directly to so many of them dying in the fire that would eventually consume the factory.

The backlash to the tragedy was immediate.

Workers had already been agitating for better working conditions, including organizing a strike two years earlier that was referred to as the Uprising of the 20,000, and many had joined trade unions like the International Ladies Garment Workers Union. After the fire, though, labor organizers had more public support. More than 350,000 people attended a funeral march for those who died in the fire. New York City already had some workplace safety regulations, but the regulations weren’t really enforced. Pressure from activists led to the creation of New York’s Factory Investigating Commission, which immediately started inspecting factories and enacted laws related to safety and sanitation, and placed restrictions on employing children.

The fire led to the creation of many workplace protections we have in the US today, which still aren’t perfect. In 2016, in fact, the Department of Labor found that 85% of garment factories in LA, the current hub of US clothing production, routinely broke wage laws.

However, there are now laws and regulating organizations that can hold employers accountable for violating workers’ rights, and many of those are the direct or indirect result of the Triangle fire. In fact, Frances Perkins, the first woman to serve in a presidential cabinet role as the head of the Labor Department under President Franklin Roosevelt, witnessed the Triangle fire, and she credited the horror of that day for her ongoing dedication to improving the lives of working people. As Secretary of Labor, Perkins helped create the Social Security system, national minimum wage laws, and the national standard of the 40-hour work week.