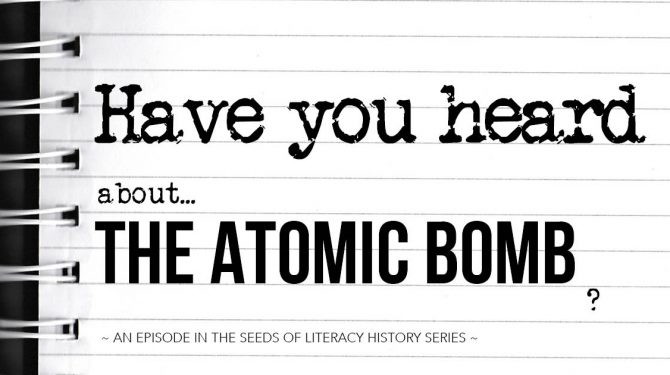 In the early hours of July 16, 1945, something terrifying and new happened in the deserts of New Mexico desert.  Just before 6 a.m., the sky was filled with a light three times brighter than the surface of the sun, an event observed by a secret group of scientists and military experts.

This was the Trinity Test, the first explosion of an atomic bomb.

Powerful, dangerous, and lethal, the Atomic Bomb has loomed as a threat ever since.  So, why did we create the Atomic Bomb in the first place, how does it work, and why is it such a big deal?

Before World War II, the Nazi Party in Germany was growing in power and strength.  They persecuted many, most notably Jews, but also homosexuals, Catholics, Communists, artists, intellectuals, and the handicapped.  It was obvious that they were up to no good.

Several Jewish scientists left Germany for fear of their lives.  Many fled to the United States, and they brought a troubling piece of information with them: the Nazis were trying to develop powerful new weapons to use in future wars.

Even though we weren’t fighting at the time, President Roosevelt was concerned about what would happen if Germany started a war.  The German scientists warned Roosevelt about the Nazi’s weapons program, and the most dangerous weapon: an atomic bomb.

Atomic Bombs are much more powerful than regular weapons.  When people describe atomic explosions, they refer to the size of the explosion in kilotons.  A kiloton is the amount of energy released by exploding 1,000 tons of TNT dynamite.  Think about that: 1,000 tons!  That’s 20,000 pounds of dynamite in ONE kiloton.

Atomic bombs do this by using a process called nuclear fission.  Here, atoms of matter, are broken down into energy.  Uranium is used because it’s the easiest atom to split apart.  However, it leaves behind small pieces of matter that are unstable, and continue to break down.  This is called radiation, and it is incredibly dangerous to living things.  Even minor exposure can cause burns, and over-exposure often leads to cancer or other diseases.

Learning about this threat, Roosevelt decided to take action.  He instructed the military to begin a top secret project to develop an Atomic Bomb of our own, one we could use against Hitler and his Nazis.  The military hired the best scientists that they could find and called the program the Manhattan Project.

Over the next several years, the United States spent millions of dollars on the project.  An entire city was constructed in Oak Ridge Tennessee to refine the special fuel needed for the atomic bomb to work: uranium.  The project was the most tightly-guarded secret in the country.  For example, the Oak Ridge facility had over 75,000 employees, and NO ONE in the city knew what they were actually working on, not even the military commander in charge.  Each person only knew enough to do their job, and sharing any information with anyone else was a federal crime.

It took several years, but by 1945, the scientists in charge of the Manhattan Project had designed two different types of atomic bomb.  They tested the first design on July 16th.  The test was a massive success, and President Truman ordered the bomb be used to help end World War II.

Though it had been developed to help fight Nazi Germany, the German army had surrendered a few months before the bomb was ready.  However, the US Military was still fighting the Japanese.  Many Americans were angry at the Japanese for the sneak attack at Pearl Harbor that had pulled America into the War, and Truman wanted to end the war quickly.  The Japanese government continued to fight, and they were reluctant to surrender.  Some feared that trying to invade Japan would cost the lives of many American soldiers.

So, in August of 1945, two atomic bombs were dropped on cities in Japan: Hiroshima and Nagasaki.  The bomb dropped on Hiroshima released 16 kilotons of energy, the same as 320,000 pounds of TNT.  Approximately 200,000 people were killed in the explosions, and many more suffered illness from the radiation.

Most of those injured in the attacks were civilians.  Because of this, many people think that dropping the bombs on Japan was morally wrong.  The devastation caused by the bombs was horrific, however, Japan surrendered shortly after the second bomb was used.  There is still a debate over whether using them was the right thing to do.

After the war, development of new bombs continued.  Modern nuclear weapons are hundreds of times more powerful than the Hiroshima bomb.  The countries that have nuclear weapons have avoided using them because of the horrible consequences for doing so.

The legacy of Atomic weapons is…well…complicated.  The weapons themselves remain dangerous and terrifying, while some of the technology they’ve produced, such as nuclear power, has been tremendously beneficial.  At the end of the day, nuclear technology isn’t going away.  It’s something we need to learn how to harness safely and peacefully.  Hopefully, this first use of Atomic weapons will end up being the last use of them as well.

Tags: Atomic Bomb, Have You Heard, History, video
Share this...