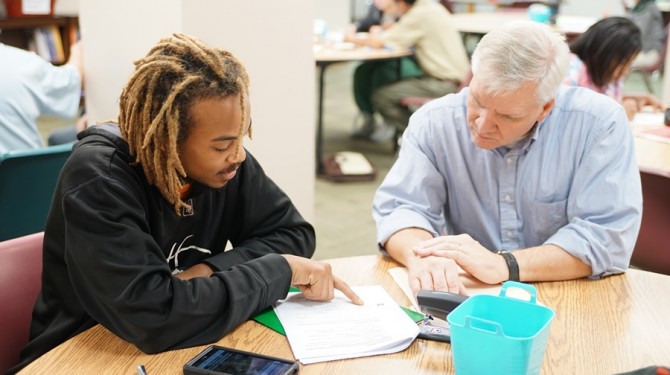 A former student who had earned her GED® credential came into my classroom last week and asked me if she could come back. There were, she told me, a couple of tutors that she wanted to talk to. When I started asking her which tutors she wanted to work with, the way she described one of them was very clear:

When I say that this was clear, I should admit that it didn’t help me figure out which tutor the student was asking about. But even though the person she was looking for was still a mystery, it reveals something about how our students view us and our time together.

The student didn’t describe the woman’s face or skin color. She made no mention of voice or hair style. “…the nice lady…,” she said, “…really good at writing essays.”

I was struck by how directly this former student told me what she values from our tutors and our program. She values how we treated her and the things we taught her.

She was willing to come all the way back here from the college campus she’s been attending. She came to a GED program instead of the college tutoring center because we left a deep impression on her.

For me, this clarifies something that I think we all need to keep in mind.

When we work with students, it doesn’t matter if they’re adults or children, they’ll be looking for these two things. Are you someone who actually knows how to teach the skill they need? Are you a kind person?

When we finally figured out who it was that the student was asking about, the tutor in question is not exceptionally different from any of our other tutors in either area. The tutor is not exceptionally bubbly or warm, but she did treat her student with respect and care. She paid attention. As the returning grad told me, “she asked about my kids, about how I was doing.”

That was enough to leave an impression. You don’t have to be a naturally outgoing person to be kind; you just have to be considerate enough to ask a person how they are. And when they talk about the things that matter to them, pay attention.

It doesn’t seem like much, but it made a world of difference to this former student.

The other thing she’d mentioned was that the tutor was “really good” at writing, but I remember when this tutor started. She came up to me and asked a lot of questions about how she ought to grade an essay. “What kinds of things should I help her with?” she’d asked. “How nit-picky should I be?”

From my perspective, the tutor had been willing to help the student on something, even though she felt barely more confident of herself than the student was. But on the other side, the student didn’t see that. What mattered to the student was that this was a person who knew more than she did. She could openly ask this person for help, and the tutor was willing to offer whatever she had to offer.

At a recent tutor training, we asked a current student to come and speak to the new tutors about her experiences. One of the new tutors asked, “Is there anything we shouldn’t do?”

The student replied that she hated it when tutors didn’t feel confident. Now, only a few days later, a Seeds of Literacy grad was talking about a tutor who I know had felt very nervous working on writing, but was describing that tutor so affectionately. That tutor was someone who was “really good” at the skill she’d been so nervous to teach.

The truth is, you don’t have to be an expert; you just have to give the student a bit of confidence.

Or, to put it in the way one of my college professors did, “Fake it till you make it.” It’s not dishonest to act more confidently than you feel. In fact, it can help students feel less nervous themselves because they want to trust you. And when students feel less nervous, they’ll be more patient when you might need to review some of the material yourself or double-check an answer. Students don’t see it is evidence that you don’t know what you mean; to them, they’re seeing that even people who are educated need to double-check themselves and be careful when following directions as they work.

As the former student and I discussed her coming back, I mentioned that while we’d be glad to see her, her college might have people who could help her.

“Oh, they’ve got tutors,” she said, “but they don’t have tutors like you have here.”

You can be a source of kindness and knowledge for adult learners by volunteering with Seeds of Literacy.