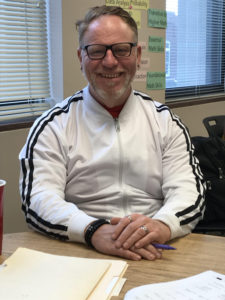 At Seeds, we often ask our tutors to imagine their way into the lives of our students. Michael Gingerich doesn’t have to.

Gingerich started tutoring at Seeds’ West Side location in early 2016. He’d grown up in the Clark-Fulton neighborhood, so it was something of a homecoming for him. More than that, it was a chance at redemption.

The start of tutoring at Seeds came during a dark chapter in Gingerich’s life. He’d just undergone a double knee replacement surgery, a procedure necessitated by his weight—“I was over 400 pounds,” Gingerich says. Due to various health and mobility problems, he hadn’t had a job in six years.

“I hadn’t been around other people in quite a long time,” writes Gingerich in an email. “I decided that before I would be able to work a full-time job, I needed to transition and get used to interacting with people.” He made a plan to volunteer 20 hours a week, and Seeds was part of that plan.

Literacy was a cause close to Gingerich’s heart. School had been a struggle for him, and he’d scraped by with mostly Ds. School counselors had misdiagnosed him with a learning disability when what was actually distracting him at school was secondhand trauma.

Gingerich’s father, a Vietnam veteran, “didn’t believe in therapy—he believed in drugs and alcohol.” Gingerich himself turned to the same comforts until he realized one morning after a bender: “I won’t survive to 24.” He is now twelve years sober.

One of the first things he did on getting sober was read the first book of his life. He was 23.

His life story has been a huge asset while working with students. “When I work with my students, I ask them why are they here,” says Gingerich. He is open about his background and his struggles. As a large-built man “covered in tattoos and hip-hop clothes,” Gingerich was often mistaken for a student. He laughs it off, but his takeaway is serious.

“I know the psychology of the students,” he says, “because I have been them.”

Tutoring at Seeds gave Gingerich the boost of confidence he needed. “The management saw something in me,” he says. He enjoyed hearing that students had asked to work with him specifically. And as a Master’s of Education student at Cleveland State, he was able to bring techniques he’d learned in the classroom to Seeds.

Today, Gingerich is in a much better place than he was when he started. He’s a social worker at Jewish Family Services, he’s lost close to 200 pounds, and he’s married. He is close to completing his Master’s in Education, and plans to obtain a PhD studying the interactions of poverty, education, and health.

“If it had not been for Seeds of Literacy,” says Gingerich, “I believe I would not be where I am today. They were a crutch for me to help me stand up and become a man again when the world had knocked me down.”

Gingerich has been through hard times, but his approach is to address the bad and move forward. “You can’t unscramble an egg,” he says. “All you can do is serve it.”

Gingerich is one of 200+ tutors that volunteer their time at Seeds of Literacy. You do not have to be a career educator to tutor — you just have to be at least 18 years old, have a high school diploma (or equivalent), and be willing to help! Seeds will train you. Learn more.