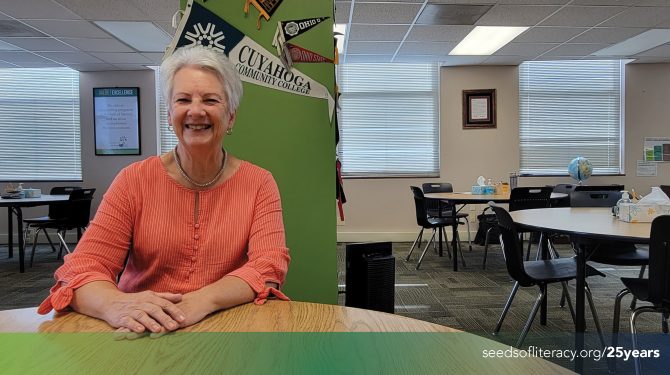 Very few people can say they’ve been a part of the entire transformation of Seeds, from church basements to world-wide online. Jane Bohne is one of the few. She’s volunteered with us for 22 of our 25 years, amassing 2,130* hours of working with students.

After college, Jane was a programmer, walking around with a deck of punch cards, and data coming in on tape and discs that looked like a big drum. When she started a family, she left. “By the time I was back into the workforce, the computers had downsized from refrigerator-size things to desktops.”

It was then that she found tutoring – first in her neighborhood, then a community college, and finally Seeds.
Growing up in a small town, attending the same Catholic school from 1st grade through 12th, Jane considers herself lucky. She liked school and often helped her friends with math. It wasn’t until she began tutoring at Seeds as an adult that she had a startling revelation.

“Some of my classmates were left behind,” she said, although she didn’t realize it at the time. With large class sizes, teachers had to teach to the majority. “If you weren’t mainstream, you were probably left out,” she said. She sees that in students at Seeds.

“What sets Seeds apart is that everyone who walks in here is truly an individual who wants to learn, needs to learn specific things, and will learn them at a different speed than everyone else,” Jane said. “Some people who come in remember what they’ve learned, others never learned concepts, and some have forgotten and just need refreshers.
Jane recognizes the dedication it takes to even come to Seeds. “There are just SO MANY obstacles they have to overcome. Their children have to be cared for. Many have to make sure their parents are also cared for. A lot are struggling to get or hold a job – more employers are requiring a high school credential. Sometimes they have to leave Seeds for awhile, but maybe you see them again in another year or two. Seeds always welcomes them back.”

One of the things she likes most about tutoring is the diversity of the students and tutors. “There are many personalities and that’s what makes it so interesting, how different we all are,” she said. “It’s enlightening to hear about their backgrounds and different view points, I enjoy it very much.” Coming from a small town, she’s learned a great deal about living in Cleveland, and bigger cities in general.

Jane admits she was nervous and probably acted like the nuns she grew up with when she first started tutoring 22 years ago – it’s all she knew. But her style changed.

“I learned I had to watch the student’s eyes to see if they were understanding what I was saying, and how to explain the concepts in a different way if they weren’t getting it,” she said. “You also have to really listen to what they say. You have to be patient.

“When a student is having trouble learning something, but they are willing to keep trying, they don’t turn off and move on. Most keep trying because they want to get it. Seeing the light bulb go off when they understand is so rewarding. They’re really thrilled!”

Jane described a woman she recently met who entered the program at a 2nd-grade reading level. After a progress check, the woman tested at a 9th-grade reading level. “She was almost doing flips, she was so happy,” Jane said. “We try to make them understand that they CAN DO IT.”

The biggest change in Seeds revolves around adapting technology. She remembers when the GED changed from paper to computer in 2014, creating another hurdle for our students. These days, more students are a little more tech savvy, but there are some that still find computers a major deterren.

Technology imposed itself on Seeds again during the pandemic. “It’s incredible how much the Virtual Classroom is thriving,” Jane said.

“Tutoring in person, I can look in their eyes and get a better sense of what they are learning. Online is all business. There’s less chit chat,” she explained, admitting she actually likes a little chit chat. “But those online students are really amazing. I admire them so much because that’s gotta be so hard. Some students work from phones, not a laptop or a tablet.”

Jane hopes that Seeds can reach even more people in the future, bring them in, and “Convince them that the GED IS possible and that it will make such a big difference in their lives.” The students are why Jane keeps coming back. “I want to see them succeed,” she said. “I see what they have to overcome to be here.”

And tutoring has made a huge impact on Jane’s life as well. “It’s encouraged me to continue to learn. If I hadn’t done this, I’d be more complacent. I wouldn’t have the perspective on what the world is really like for other people.”