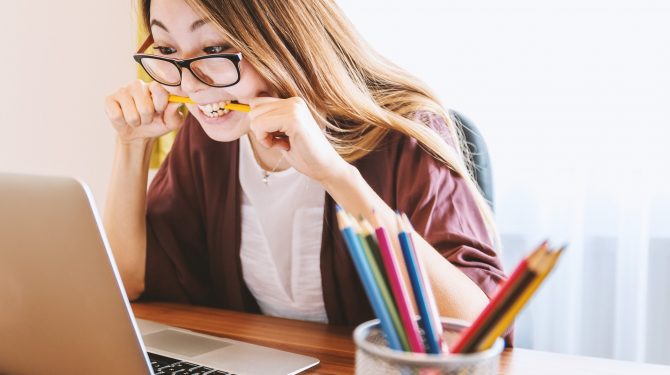 What is Math Anxiety?

Many people seem to quiver at the thought of doing math. And it’s not just in school. Children and adults alike are faced with numerous situations wherein they have to deal with math. After all, mathematics is a skill that people have to use throughout their lives. Traveling, shopping and other ways of using money and keeping track of time, among others, need us to apply math. But according to Frontiers for Young Minds, a significant number adults feel a sense of panic and stress when having to deal with situations that require them to do math. This is known as “math anxiety.”

Math anxiety also happens when one is taking a test. Especially when tackling the GED test, many test-takers experience anxiety, and this becomes a predominant obstacle in them passing it. You can hardly see people who are fond of math, and a lot are under the notion that a person is either born with math skills or not. Test Prep Toolkit states that when it comes to math, talent may not be enough. In the GED test, one needs hard work and determination to achieve the results that they want.

You Shouldn’t Be Scared of Math

Do you really have valid reasons to be scared of math? The truth of the matter is that you don’t. Remember the saying “you have nothing to fear, but fear itself?” That may precisely be the case, too, pertaining to taking the GED math test. It’s the fear that kills, not the subject. But nonetheless, math anxiety is as real as it can be. The Centre for Neuroscience in Education says: “Math anxiety describes feelings of fear, tension, apprehension or worry about mathematics” and there is a relationship between math anxiety and performance in math tests.

Anxiety when taking a math test makes one feel so afraid and uncertain. You feel so hopeless that you actually lose your confidence. Feeling anxious during your math test causes your concentration to fail, so much so that all your preparations for the said test seem to vanish in thin air. Bright Hub Education, in fact, adds when you’re suffering from math anxiety, you ought to blame your poor performance on your nerves instead of bad study skills or habits. Adult education is hard, but math anxiety can be conquered.

How To Beat Math Anxiety When Taking the GED Test

You can do half of the battle if you overcome your math anxiety when it relates to passing the GED test.  Consider these tips about beating math anxiety on your GED test day:

Otherwise, if you know deep within your wits your preparation is haphazard, then you are likely to shudder. Never undermine the importance of studying diligently for your GED test. Part of doing so is enrolling at a place like Seeds of Literacy or in a GED review center and providing yourself with a credible GED math study guide along with math practice sheets. These tools have helped a huge number of test-takers pass their exams.

2. Don’t underestimate yourself. The case is usually math anxiety has become a result of years of negative conditioning. When you were in school, you may have been getting low scores at math. When taking your test, you may tend to focus on your fears and negative thoughts, rather than in studying or responding to the questions in it. It’s an old saying, but it still rings true: “If others can do it, so can you,” and this you have to inculcate in yourself. Remember, more than 20 million people have passed the GED test and a lot of them started with bad grades in school. You may have been thinking all along that you’re simply dumb in math, but at this point, you must – you MUST – unlearn that.

Try to apply this method of unlearning your fear of math. When studying for your math test, be particular about the questions that you answered correctly and otherwise. Correspondingly, you should then focus on those items you responded to correctly and forget those you answered wrong. By putting your attention on your successes, you slowly build your confidence. But of course, you have to study those questions that you missed. Your goal is to dissolve your lack of confidence which causes your anxiety.

“If others can solve math problems, so can I.”

“I believe my brain has enough power to help me solve math problems.”

“I will pass the GED math test because I am well-prepared.”

Preparation is the Best Antidote to Your Fears

A great deal of people failed the GED math test because they fell to their fears and anxieties. You don’t have to make the same mistake. When it pertains to the GED math test, half of your battle is won if you learn to control your fears. The best antidote that can appease math anxiety is foremost preparation.

Do your best to study for your GED math test, believe in yourself, and remember that fear is just but in the mind. You have knowledge and power to overcome math anxiety, and you can pass your GED math exams with flying colors.

A version of this story originally appeared at Test Prep Champions.