The Business of the GED® Test 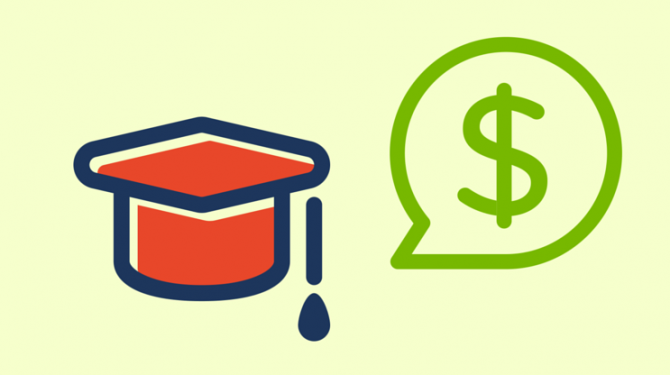 What comes to mind when you think of Black Friday deals? Star Wars toys? Smartphones?

How about the GED® test?

Since the GED exam became the property of GED Testing Service, a joint venture between the American Council on Education and for-profit test-maker Pearson, the test has undergone a branding makeover. From GED Testing Service’s branded marketing to its active social media presence, it’s pretty clear that the GED test is now a product.

As an adult education program, we’re wary of the sales for one simple reason: education and test-taking shouldn’t be on a whim, and it certainly shouldn’t be dictated by when a company decides to put its product on sale.

Which is why we were so disappointed to see the latest deal GED Testing Service was promoting on Cyber Monday, the day of online shopping mark-downs that follows Thanksgiving.

Not wanting to be left out of the buying season, GED Testing Service teased followers on Twitter and Facebook to “stay tuned” for their “exclusive” Cyber Monday sale.

This was their deal, good for one day only: purchase all four sections of the GED exam, and GED Testing Service would give you the four GED Ready™ practice tests for free.

ICYMI – Today only: #AdultLearners can save BIG on #GEDReady practice tests when they schedule all four #GED tests. pic.twitter.com/rYHwQyNiTQ

So what’s the problem? Well, the GED practice test is meant to show how you would fare on the actual exam, before spending your money, time, and effort on the official test.

With this deal, buyers were paying the expensive price for the GED test before they even bought the thing that shows them if they’re ready for the test.

The cost of the entire GED test varies by state, but for most, like here in Ohio, the price is $120 for all four sections. The practice tests, on the other hand, are priced by GED Testing Service at $6 each. So on Cyber Monday, spend $120, get a $24 value for free.

From a business perspective, it makes perfect sense: sell people the more expensive product and give them the cheaper item for free.

But from an educational standpoint, it’s completely backwards.

These sales no doubt benefit some people who need to take the GED test, especially considering how expensive preparing for and taking the test through GED Testing Service’s products can be. For people who know they have higher skill levels and who have been putting off taking the test, a sale like this might be the push they need to get it done.

But for many people who need a GED credential, this takes advantage of both their educational and financial need.

Think about what is at stake if someone takes the GED test before they are ready. First, their money takes a hit.

As GED Testing Service will tell you, people lacking a GED credential have trouble finding employment and earning equal wages to high school grads —  which means they have less income, and might be more inclined to buy the test when it’s on sale instead of when they’re ready. If they fail the test, then, they have to pay to take the test again…. and again… and again.

So the very people who have less money because they need a GED credential are more at the mercy of GED Testing Service’s sales, and would possibly be spending more to pass the test in the long run.

Even more harmful, though, than the damage to their wallets is the potential blow to their confidence and motivation.

If you take the test before you’re ready, even just a practice test, you can feel overwhelmed by the material and discouraged by your performance — so much so that you might then turn away from studying for the test altogether. 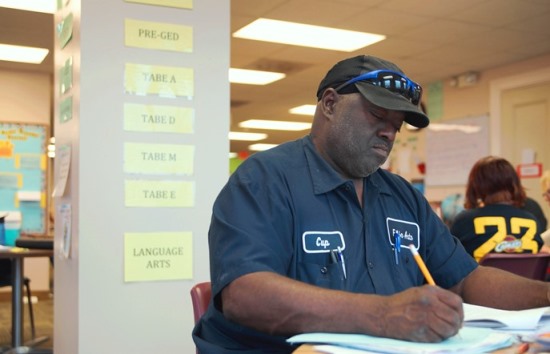 A Seeds of Literacy student works in front of the Language Arts curriculum path, showing the different skill levels that lead to being GED test ready.

Instead of starting with the GED practice tests, a skills assessment — like the kind offered by Seeds of Literacy for free during registration — breaks down what skills a person currently has or needs to work on, without the unnecessary pressure and motivational risks of taking a GED practice test. Students and educators get a sense of where they are on the ladder to the GED test and can begin moving up it, instead of the other way around.

Math assessment tests show us that the vast majority of students start our program needing help with fractions or long division review — miles away from factoring polynomials on the GED test. But that’s okay, because it’s our job to guide our students to that point.

We don’t take new students and give them GED test questions to see if they’re ready — so why is GED Testing Service doing it?

This promotion and others like it reflect a fundamental misunderstanding that GED Testing Service has about the nature of preparing for the GED exam.

However, they do fit in with a marketing plan that seeks to position the GED Ready™ practice tests as a starting point for studying for the GED test, because that way people are engaged with GED Testing Service’s products right from the start. If people started with a local preparation program, GED Testing Service might be left out of the picture for a long time.

Taking a GED practice test as a first step in readying yourself for the actual GED exam is akin to someone walking down the street and saying, “I wonder if I’m ready to be a firefighter?” before dashing into a burning building. That’s not how it works.

In our experience as an education provider, it can take years of preparation for an adult to raise their skills to the necessary passing levels. Yet with their Cyber Monday and other flash sales, GED Testing Service creates a false sense of urgency to make people who need a GED credential buy their product right now.

They even encouraged educators to share the sale with their students, though we imagine that any adult educator might feel morally queasy encouraging a student to pay for the GED test before taking the practice tests and understanding where, exactly, their skill levels were.

But those are adult educators. It’s not GED Testing Service’s responsibility to make sure everyone who pays for their tests are actually ready to take them.