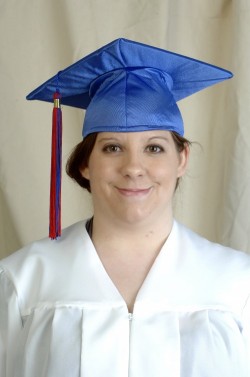 It can be difficult enough for anyone to make it through high school or pursue a GED. For Megan Gregg, the obstacles that prevented her from completing her education came not only from the outside world, but from within herself as well – literally. Her congenital heart conditioned worsened as a teenager, causing her to miss weeks and weeks of school and leaving her unable to graduate.

Part-time jobs then kept her from starting on her GED right away. “I wasn’t pushing as hard as I could have been because you get discouraged as life comes up,” Megan explains. When her hours were cut and her employment eventually terminated, Megan told herself, “This is where I’m meant to be,” and began anew to pursue a degree.

Memories of high school were still fresh in her mind when she started classes at Seeds of Literacy, but Seeds stood out by contrast. She was surprised by how many people were not only willing to help, but to make sure she truly understood the lessons. “It wasn’t like in high school where they figured if you saw something once, you knew it,” Megan says. “Seeds is helpful and patient and I could go at my own pace.”

The flexible classes fit her unpredictable work schedule, and Seeds’ personalized approach prevented Megan from getting frustrated. “You helped me isolate exactly what I had problems with instead of making me take everything over again,” she says. “I don’t want to say it was easier, because it wasn’t.  It was hard work. But you didn’t judge, you didn’t belittle anyone, you never made anyone feel that they couldn’t achieve their potential.”

Now that she’s earned her GED, Megan has her heart set on becoming a librarian. “The people in my family are avid readers. I couldn’t think of a place where I’d be more comfortable or do more good than in a library.” Seeds of Literacy helped to boost her confidence, but truly it is Megan’s own dedication, revealed in her accomplishments at Seeds, that changed her outlook. “If I graduated from here, why not go to college?” Megan asks herself now. “Seeds makes you feel like anything is possible.”