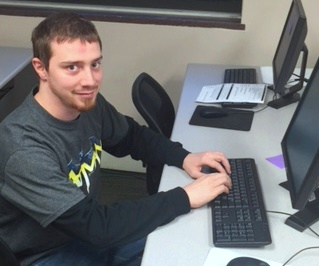 “I left school when I was 18, almost ten years ago,” recalls Seeds of Literacy student Kasey Davis. “I’ve been working the whole time – roofing, taking apart factories, hanging flyers – I’ve always been the kind of person who makes money. But I wasn’t going anywhere.”

The oldest of a large family, Kasey dropped out of school in 11th grade after finding out that he needed an additional two to three years to have enough credits to graduate. “I didn’t take school seriously,” he says. “I was there to have fun, and I daydreamed a lot. I was always the teacher’s pet, but I didn’t pay attention unless something interested me.”

A decade of dead-end jobs followed. The turning point came when Kasey was working as a manager of a fast-food chain restaurant. It was then that he realized that his boss, who had worked there for 35 years, only made 75 cents an hour more.

“I wanted more out of life. I want to be an inspiration to the children I want to have, and to my family. Education can get me more. I don’t want just a job. I want to make it as big I can, and say I did it when it’s all said and done!”

Kasey heard about Seeds of Literacy from his cousin, who is a Seeds graduate. “I enjoy the atmosphere. People here want to learn, and you can get the help you need. It’s the people who make the difference.” Seeds is fortunate to have over 200 active tutors who work with students at morning, afternoon, and evening sessions. Seeds staff matches a student’s need with a tutor’s ability, and great learning relationships are formed.

With the help that he received from Seeds, Kasey has already passed two sections of the new GED® test, Social Studies and Language Arts. He attends classes four nights a week, after putting in an 8-hour day at his job as a warehouse worker. “I didn’t have the easiest life, but I’m using that as my motivation,” states Kasey. “Education is undervalued. I know there is more to life than scraping by with your teeth.”

Besides, he has a promise to keep. “When my younger brother graduated from high school, I promised him that we would both go to college,” Kasey grins. “And I’m a man of my word.”