Seeds Lights Up CLE on the Terminal Tower 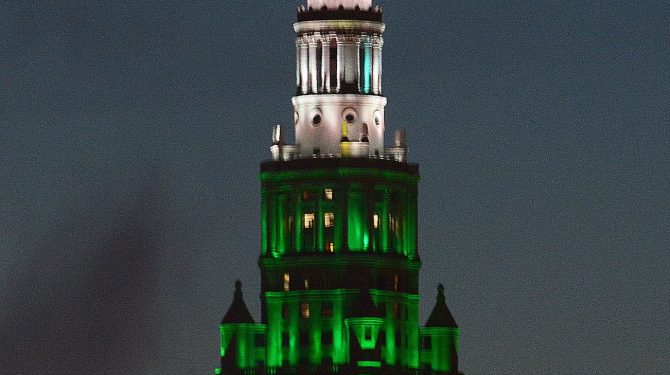 Sure, Clevelanders love the Rock Hall, the West Side Market, and the Guardians of Transportation. But in terms of city landmarks, you can’t beat Terminal Tower. It’s our most distinct and easily recognizable skyscraper, featured regularly in TV shows and movies set in The Land.

That’s why we see it as a major achievement that this week, the Terminal Tower is going green and white for Seeds of Literacy! The Tower’s iconic top will be lit on June 26th to celebrate Seeds’ graduation and the accomplishments of all our graduates.

Special-colored lights on the Terminal Tower are used in honor of significant events. The tower will go red and green for Christmas or red, white, and blue for federal holidays. They’ll be lit in our sports teams’ colors to celebrate victories. We think a tiny, educational nonprofit being honored in this kind of company is a pretty big deal!

Some history on the Terminal Tower: it was conceived by the Van Sweringens, the reclusive, wealthy brothers whose projects helped shape Cleveland and its surrounding area. They wanted a quick rail route from the city to Shaker Heights, the suburb they’d designed, and they wanted a building to sit over the terminal. What started as a modest 14-floor proposal grew into the 52-story skyscraper we know today. At the time of its opening in 1930, Terminal Tower was the second highest building in the world, and until 1964, it was the tallest building in the US outside New York City.

The Tower has played host to some notable events in its nearly 90-year history. In 1938, two players from the Indians broke a world record by catching balls caught from the top of the tower. In 1976, its 42nd floor observation deck was the site of a hostage crisis that was resolved peacefully. It most recently made the news when its current owners announced they would be opening residential apartments inside the Tower–guys, invite us over!

The Terminal Tower is an essential part of Cleveland’s history and landscape. Today, we’re happy that Seeds and our graduates get to be some small part of that story.