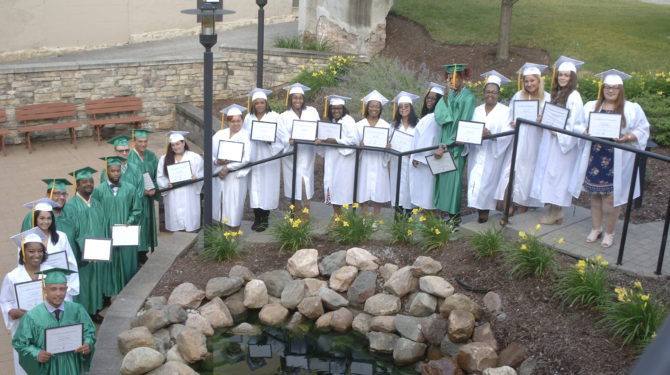 With Pomp and Circumstance

The Class of 2018 was Seeds of Literacy’s largest, with an incredible 57 graduates – some of whom passed their final subject just hours before graduation!

“You persevered through difficult packets, medical problems, and transportation issues. You dropped the kids off, left long shifts at work, handled family emergencies – and then came straight to class. You have battled frustration, fatigue, and unforeseen circumstances. And now, you’ve made it,” said Billy Hallal, DLC, before presenting their certificates.

The most powerful speeches of the evening were given by two members of the graduation class – Latasha Jenkins (Seeds West) and Dionne Lobban (Seeds East). 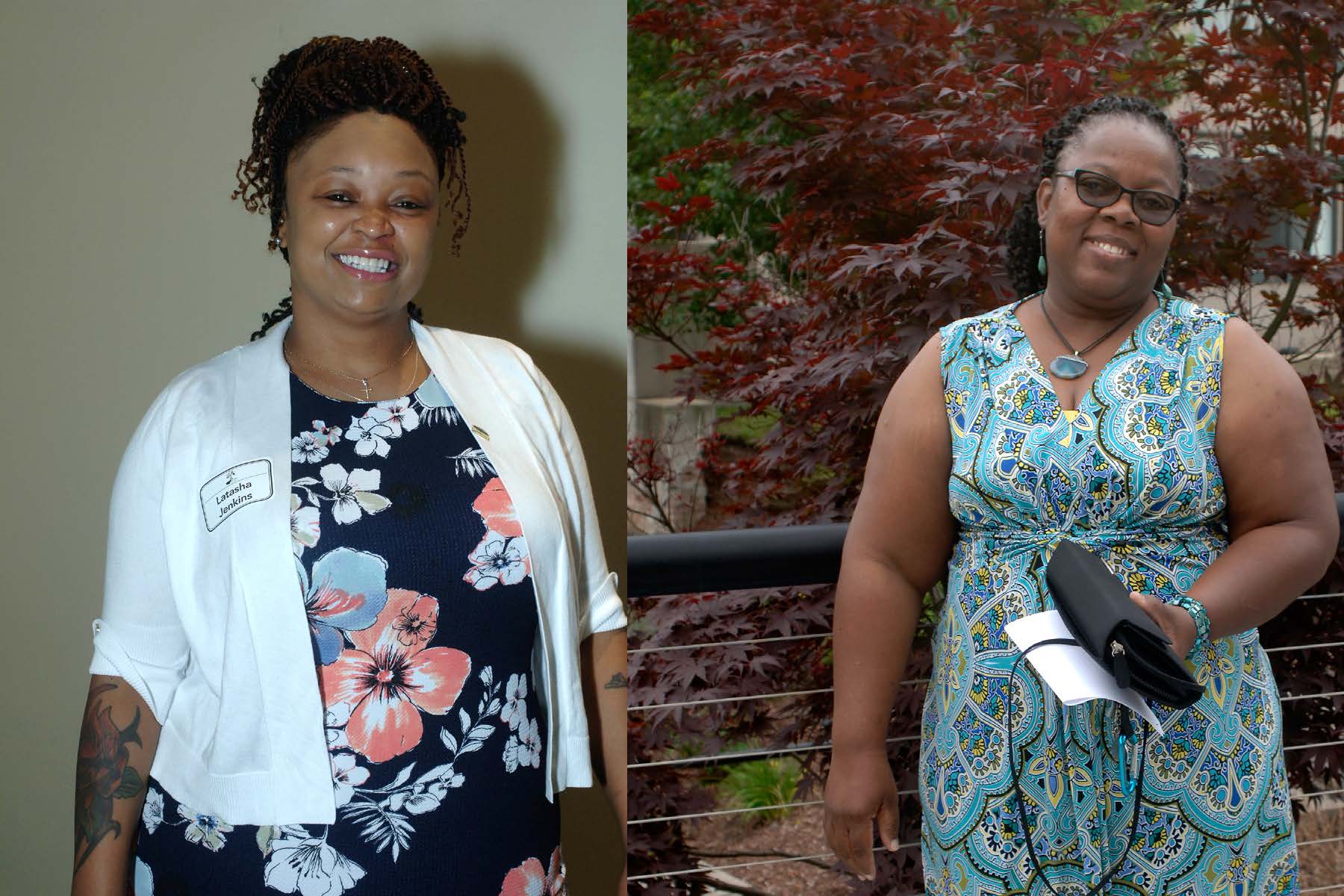 Upon taking Science, her final section of the test, Latasha Jenkins anxiously checked for her scores. While pacing in a bus shelter, the young mother finally received the notice she was waiting for and began to cry. “It was like a huge weight was lifted off my shoulders,” she said. “It was something I could be proud of, something I could tell my children about, something that I could show them comes from hard work and comes from going to school.”

Despite learning she was legally blind, raising a family, and working full time, Jenkins had earned her GED. Her next step is Cuyahoga Community College, for business management. She knows it won’t be easy, but “No matter what, I’m ready,” she said. “I’ve kicked in so many doors already, so no now I’m ready to knock the rest of them down.”

Jamaican-born Dionne Lobban came to the U.S. after having her son because she knew the opportunities here would be greater. But without her GED, she struggled.

Last spring, she started as a student at Seeds. She found it ideal because she worked at her own pace and around her own schedule, quickly forming relationships with tutors, site coordinators, and her classmates. Surprisingly, these relationships made graduation bittersweet.

“I’m happy because I am one step closer to my goals, but sad because I enjoyed every moment here,” she said. In fact, Dionne has been a regular at Seeds’ Book Club, months after passing her final section. “I do intend to come back and volunteer,” she said.

Dionne and her son have indeed found opportunities, and don’t take them for granted.  “We will BOTH be starting college in the fall,” she said with pride.

The Unsung Heroes of Non-Profits

Graduation isn’t just an event to recognize the achievements of the students. It is also a celebration of the tutors and volunteers who are truly the heart and soul of the program. One-to-one instruction is only possible because they show up, every day, and give so freely of their time and talent.

“Though our volunteers come from different professions and are all different ages, they share the same dedication that compels generosity and compassion,” Executive Director Bonnie Entler said before presenting some very special awards. 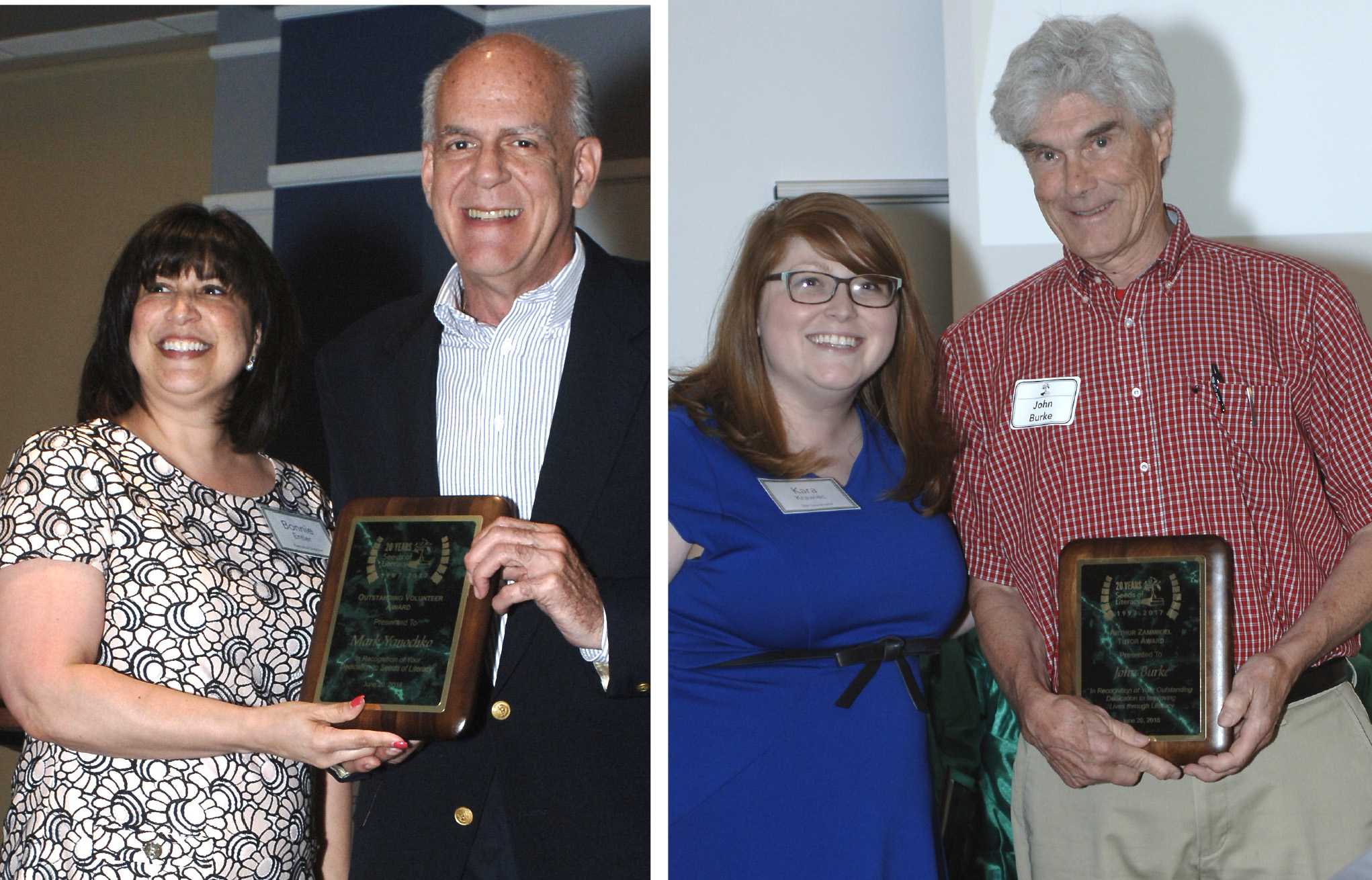 Outstanding Volunteer Award: MARK YANOCHKO
For 13 years, Mark has generously donated his time, providing more than 500 hours of tutoring. He’s chaired the Community Relations Committee since 2013, and is now in his eleventh year of board service, currently as Vice President. An avid photographer, he’s taken photos at our events and donated his artwork to Seeds’ fundraisers.

Site Coordinator Kara Krawiec took the stage to present the Arthur Zammikiel Tutor of the Year Award to a tutor she has been grateful to have in her classroom.

Arthur Zammikiel Tutor of the Year Award (for the person who embodies what it means to be an exceptional tutor) : JOHN BURKE
John tutored on both sides of town since 2009. He often biked to class, regardless of the weather, in order to ensure that students had the chance to learn. He’s in several times a week and never shys away from any subject. “His passion for learning and his compassion for others is evident every time he steps into the classroom,” Krawiec said.

Saying Goodbye to the Brunch

For more than 16 years, the Sowing Seeds of Hope Brunch and Auction was Seeds’ main event. Entler announced it would be replaced with a new event, but not before recognizing a few of the individuals who went above and beyond each year to ensure the brunch’s success. 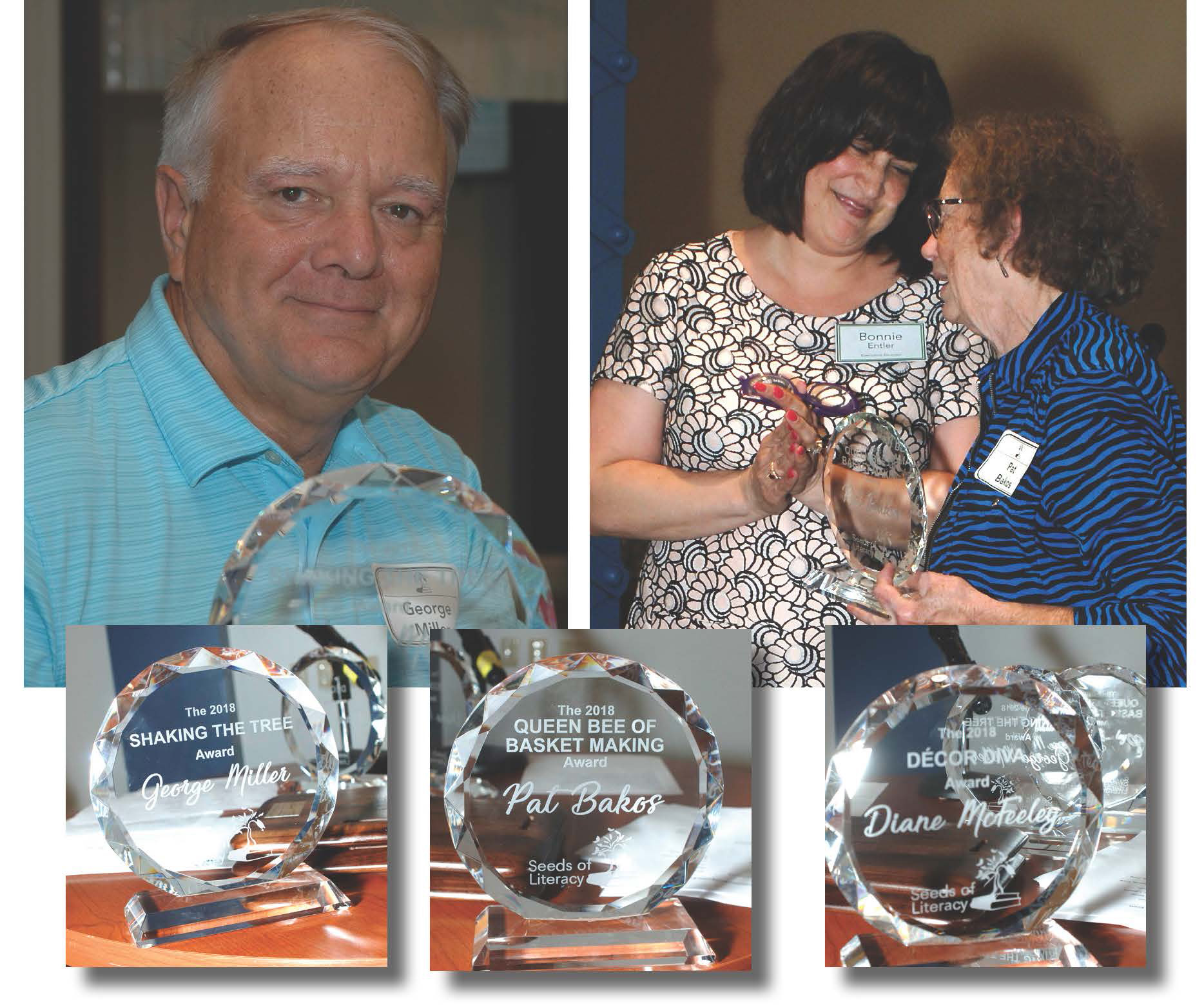 Shaking the Tree Award (for sponsorship gathering): GEORGE MILLER
Large events are only possible with support from large donors. And it is no easy feat rallying their support. “It takes finesse, compassion, and if we’re being honest,” Entler said, “the ability to call in some favors from pretty great connections.”

Queen-Bee of Basket Making (for excellence in auction basket assembly): PAT BAKOS
The highlight of the brunch has always been the auction. The in-kind donations Seeds received from area business always led to unique and fun packages that kept the bidding lively. Even so, it took a lot of work to make paper gift certificates visually interesting and one woman rose to the challenge, year after year.

Décor Diva (for inventive transformation): DIANE MCFEELEY
Each year, the decorations for the brunch exceeded the expectations of guests. They have not only been stunning, but inventive. Only one woman had the talent and passion to take on the amazing feat, “Although we suspect she really does it in trade for Seeds keeping her husband Bob out of the house,” Entler joked.

“We’re sad to retire the brunch, but we’re excited about the new events the future holds,” Entler said. “We can only hope that George, Pat, and Diane know how important they are as members of the Seeds’ Family.” 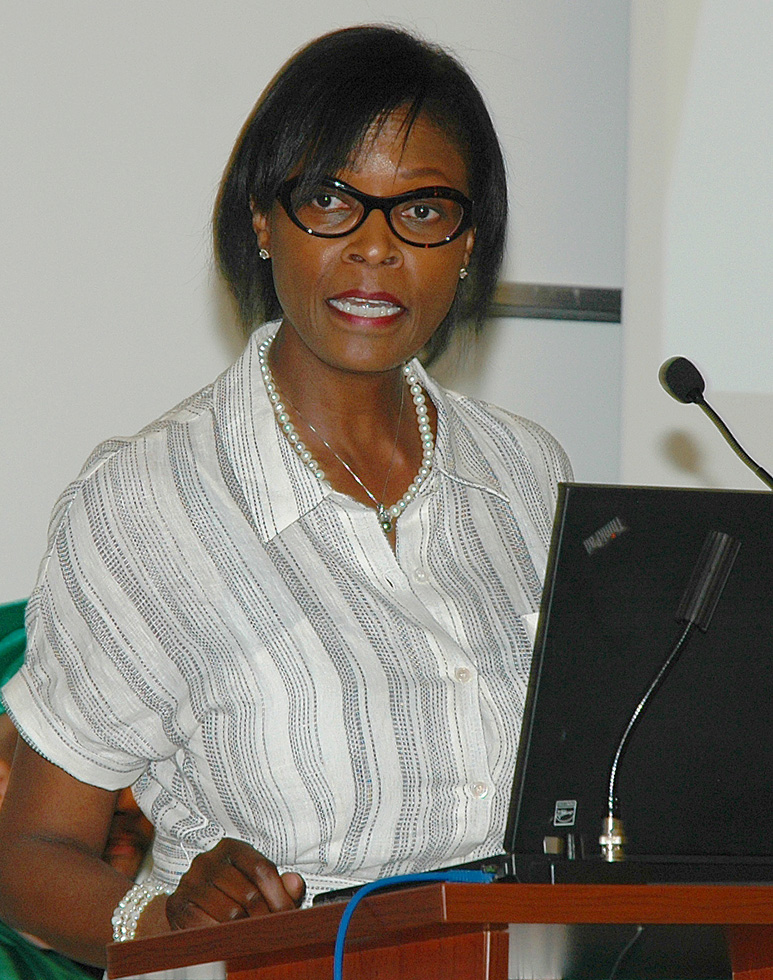 Special guest, Ohio State Senator for the 21st District, Sandra Williams presented the keynote speech. She represents more than 280,000 people in a district that encompasses both Seeds locations.

“You believed in yourself, you were not discouraged when they told you how long it might take. You didn’t quit when people told you it was impossible,” she said to the grads. “When they told you NO or when they asked why you would put yourself through such a task, you continued to push forward. You had discipline.”

“I’m so proud of you and what you’ve accomplished, because you’ve proven, without a shadow of a doubt, that you have the fire in your belly.”

The Senator didn’t just applaud the efforts of the graduates. She also recognized the 200+ Seeds volunteers with her favorite quote: “To the world, you may be one person. But to one person, you may be the world.”

“You generously gave your gift of time to make contact, provide support and encouragement, and perhaps humor, to make this educational journey a bit more bearable,” she told them.

Green As Far As the Eye Can See 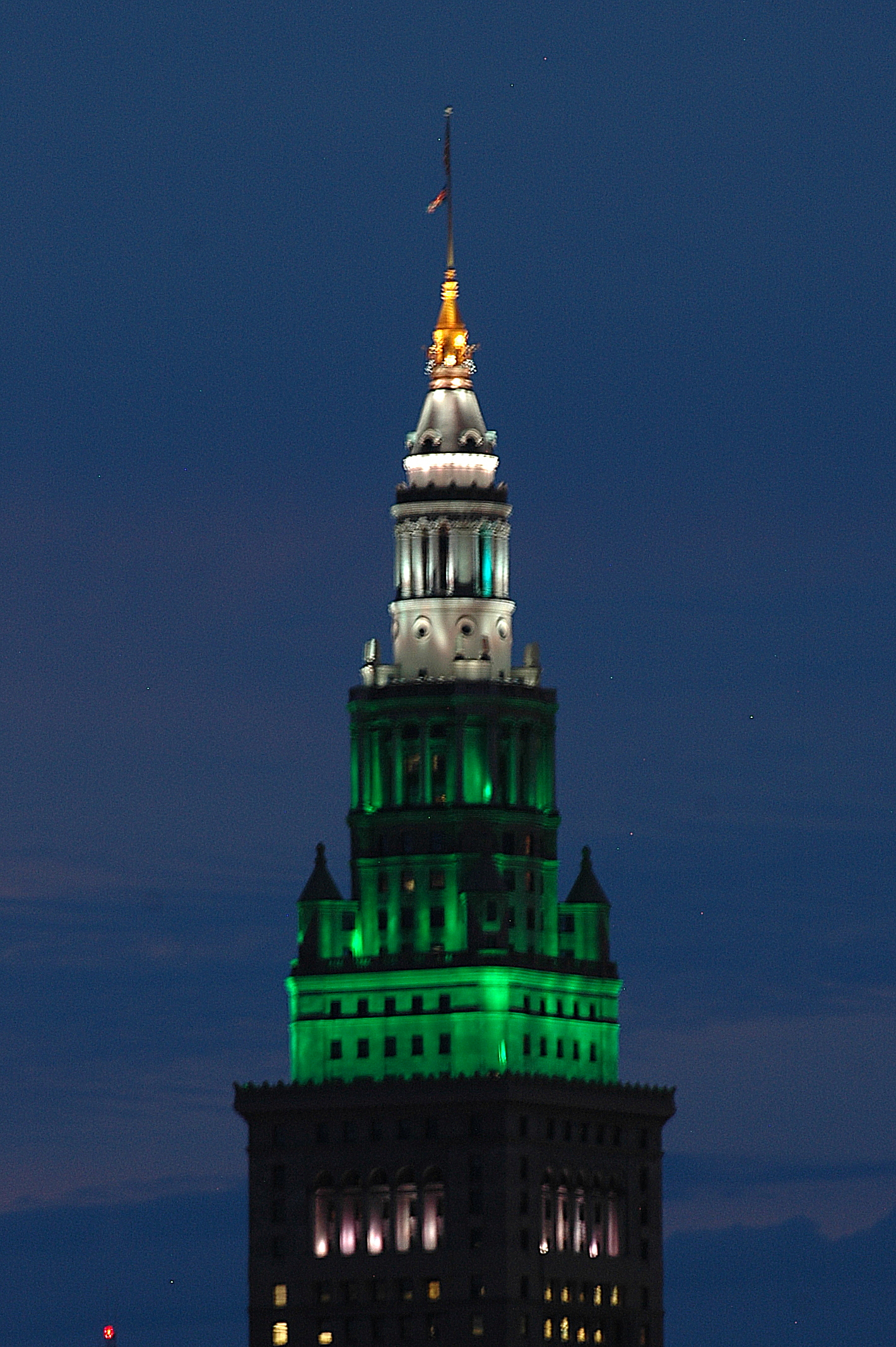 Once again, the Terminal Tower was lit to recognize the achievements of our grads, thank the Seeds’ volunteers, and shine a light on the importance of adult literacy in Cleveland.

CLICK HERE TO CHECK OUT OUR PHOTO ESSAY FROM THIS EVENT