Running for (Seeds of) Literacy In Antarctica 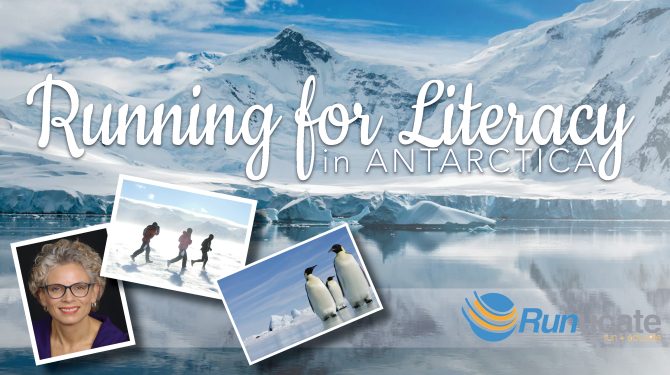 What does Seeds of Literacy have to do with what’s commonly known as “The End of the World” in Antarctica? The answer to that question originates four years ago.

Margo Hudson (grad, tutor, ambassador, award-winner) works in the United Club at the airport. For the talkative woman who always has a smile on her face, it’s a great job because she meets so many people and makes new friends every day.

In 2018, she introduced a new friend, Captain Courtney Schoch, to Seeds of Literacy. It was a great match – literacy holds a special place in Courtney’s heart.

Courtney faced challenges, violence, and bad relationships as a young adult, but she got her GED and things started to change.  Her story fascinated Seeds’ students, particularly her career in aviation, running marathons next to lions, and her fortitude to make it all happen. Or, as she calls it, owning her story so it doesn’t own her.

Since her first trip to Seeds, even more has changed in Courtney’s life.

Her visit earned her a keynote speaking opportunity for ProLiteracy’s annual conference in San Diego 2019. From there, she was tapped by LANCÔME Loreal to speak to hair and makeup stylists and women receiving makeovers at the headquarters in New York City.

If that wasn’t impressive enough, she wrote a memoir This is Your Captain Speaking.

The next chapter of her life was poised to be even better and she was excited.

Planes were grounded. Marathons were cancelled as lockdown orders swept the world. Suddenly conferences and speaking events were put on hold, or cancelled indefinitely. Her exciting book launch fizzled. She found herself with nothing to look forward to.

Pilots faced furloughs. She stopped running. Her ability to promote her book was limited. And like the rest of the world, she found herself spending more time on the couch glued to the continuing coverage of a scary pandemic. A go-getter and adrenaline junky by nature, Courtney found herself in uncomfortable and unfamiliar territory.

Fortunately, the pandemic left people with a lot of time to read, and her book began making its rounds despite not having a splashy launch. It landed in the hands of podcasters of various industries: running, philanthropy, women’s issues and empowerment – and they conducted interviews by phone and Zoom. Each interviewer felt an immediate connection with her.

She gave up her left seat, the Captain’s chair, at a regional airline to move up to the majors as a First Officer. (She jokes that “Captain” is like “President”. You keep the title even after you’ve left the position. Advantageous because “Captain Courtney” rolls off the tongue easier than “First Officer Courtney.”) She may have lost seniority but she gained the flexibility to revive her speaking and running passions.

Best of all, she has a new marathon booked.

The moment a marathon in Antarctica was announced, Courtney signed up with the full support of her new airline. Her nonprofit had sat idle during the pandemic, but now Runucate was breathing new life.

Antarctica may seem like a long way to go to run 26.2 miles. But Courtney is a member of the Seven Continents Club, an elite group dedicated to running a marathon on every continent. Antarctica is #5 for her.

Through Runucate, Courtney raises funds and awareness for adult literacy in economically impoverished areas and neighborhoods.

Antarctica is the third marathon she is running to support Seeds of Literacy. She will donate 80% of the proceeds raised by Runucate to Seeds. What remains contributes to her entrance costs.

Her blog will document the entire journey, from training today to the return trip to the states in March. We’ll be following along!

Previous marathons for Seeds include: