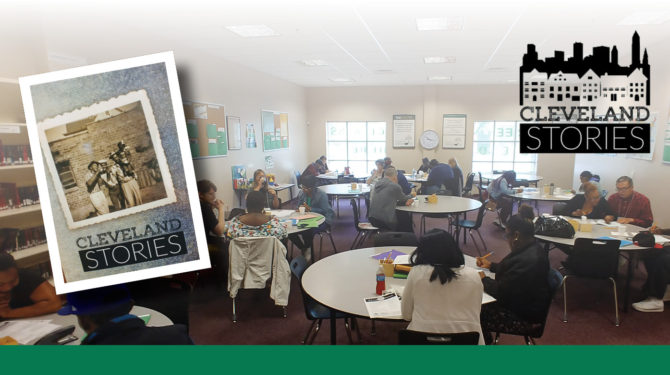 Dorlinda comes to class to snack. Funyuns, Doritos, donuts. She spills powdered sugar all over a chair in the computer lab. Her husband left her for her downstairs neighbor. She starts crying in the middle of class one day, and Kara, who runs class with me, spends the better part of an hour comforting her. About once a month, we have the same conversation with Dorlinda: she’s going to get her act together, she’s going to come to class every day.

Carmen comes to class because she looked through the window. She’s in her sixties, wears a denim jacket with Tweety Bird on the back. She stays just a couple blocks down the street, had walked past Seeds a hundred times. She said to herself, “I’m going to go in there one day.” Months passed. Walking past, she looked through the window, the one that says FREE GED CLASSES HERE in huge letters, and saw Kara “skipping around” class, smiling, helping students. Now she comes to class every day.

Jake comes to class to type. He works hard at his math and reading packets, but typing is his favorite. He’s trying to get up to thirty words per minute. Handsome guy, nineteen or twenty. Just out of jail. A new student, a girl his age named De’ja, starts coming in, and they sit together. I observe them with Todd, who runs the computer lab. We cheer for them to become an item. Jake all but confirms this when he calls her his “private tutor” and she blushes. A few weeks pass and neither of them are in class anymore.

Jackie comes to class for the clubs. She’ll stop in at math club and computer club. She brings food for book club every Wednesday for months. She even started her own club with Carmen and Catherine: Granny Club. They call each other “granny names” like Bonita and Mary. Someone brought them a tiny wheelchair. I take Jackie to Playhouse Square for a book awards ceremony. Afterward, there are long lines for food. I ask her if we should get in one, and she laughs. She goes up to the food she wants, politely asks people in line if she can grab some. She hands me plates of endive salads, squash medleys, gourmet mac and cheese. We eat like kings.

Jada comes to class infrequently. Mid-twenties, comes to class half the time like she’s dressed for the club. Her scores are off the charts. Todd and I plead with her to come at least once a week. She tells us we don’t understand. She can’t have people knowing she goes to school. “In here, I study,” she says. “Out there, I’m the queen of the ghetto.” She comes in one evening with her lip split open. We ask her if she’s ok, if she can tell us what happened, but she tells us everything’s fine. At the end of class, I tell her to please be safe out there. Her eyes well up. She gives me a brisk hug, then walks quickly out the door into the night.

Jackson comes to class almost every day. He’s an older man sporting a durag with glasses and an Eagles jersey. His laugh is low and infectious. He passes three of the four sections of the GED, has only math left. Math is the hardest. He knows this, but he’s ready, excited to get to work. He doesn’t show up for class the next day though, or the day after that. We call his number, but the line is disconnected. We send emails, but they bounce. We know that things happen. We know our students have to move unexpectedly, get jobs, get sick, take care of family. We know they get discouraged. But not Jackson, we say. Jackson will turn up again. We wait weeks, months. He doesn’t come back.

Charnice comes to class and gets frustrated. She’s passed all but Math. She’s in her forties or fifties, has a precancerous condition. She’s struggled with addiction before. She may be struggling with it now. She will come to class and speed through a math packet, get half the answers wrong. Slow down, we urge her. Take your time. She ignores us and schedules the test. She takes it three times in three days. She passes on the third day. In the office, we jump up from our chairs, whooping and cheering like the Indians have just won the pennant.

Catherine comes to class and feels welcomed. She sits at a table with Carmen and Jackie, goes to book club every week. One class, a new volunteer tutor works with her. The guy is enthusiastic and well-intentioned. He gives her the hardest problem in the unit and tries to have her solve it. She thinks of school when she was younger, how frustrating and embarrassing it was. She cries and walks out of class. Kara sits and talks with her. A week later, she comes back to class and shows the same tutor how to finish the same problem. She tells this story to a group of prospective tutors in training. She thanks them for giving their time but makes a request: “Please don’t hurt our hearts.”

I come to class to work with students. My drive down Kinsman takes me past bombed-out buildings and barbecue joints, hair salons and Dollar Generals and churches. I pass a tree-lined park where high schoolers practice for cross-country, a community radio station, an urban farming collective. I pass the redbrick church at Kinsman and 93rd, where I handed out rulers with the Seeds logo at a community fair and I danced with a Zumba instructor on the street. I pass Cleveland Metropolitan Housing Authority, which recently held its lottery for the Section 8 waitlist. Around 60,000 Clevelanders applied for one of 10,000 spots on a waitlist that could take up to three years to get through. Todd and I helped dozens of students apply. They knew the odds were long, but they wanted to try. Our students are always willing to try.

Billy Hallal has written for Scene, Thrillist, and Cleveland Magazine. He has taught at Cleveland State University, led a writing center in Collinwood High School, and supervised a group home in Garfield Heights. He began his work at Seeds of Literacy at the Mount Pleasant location, but has since transferred to the Clark-Fulton location where he is the Digital Literacy Coordinator.