James A. Garfield & the Power of Education 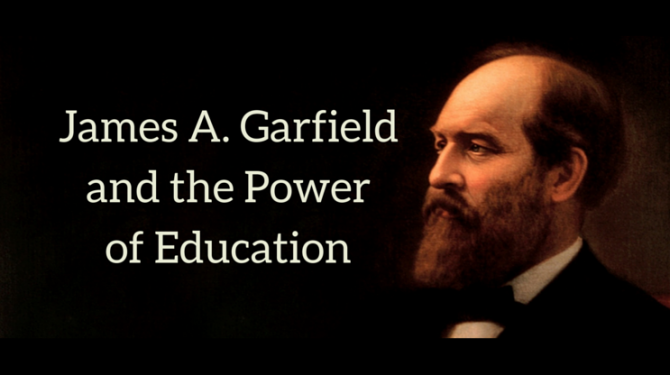 You might not realize it, but President’s Day is the perfect holiday to talk about literacy.

Most people know that Abraham Lincoln was a largely self-taught reader. His education came from a few random sessions with teachers, but he mostly was left to himself. The fact that such a brilliant mind could come from someone with only a frontier education is pretty astounding. But Abraham Lincoln is not the only president to have a very modest beginning. Many of our nation’s leaders have come from humble starts. One president in particular should strike educators a little closer to home.

James A. Garfield has one of the most fascinating stories of any President, though his short time in office means that many people overlook him. However, anyone interested in education and literacy could learn a lot from our 20th President.

Born in what’s now Moreland Hills, OH, James Garfield grew up without a father. The family had little money, and James was made fun of by other boys at school for being poor and fatherless. He left school early to earn money by working on a canal boat. However, James suffered a near-death experience when he fell overboard in the middle of the night. After he managed to pull himself back on board, he suffered a short illness. This brush with death convinced him to go back to school.

After completing what we would call a high school education, Garfield’s mother was determined to have her son do more with his life. She saved up every penny she had to send him to the Western Reserve Eclectic Institute (now known as Hiram College). He only had enough money for one semester, but he impressed the faculty enough that he was offered a scholarship.

Back then, student loans weren’t common. James was wary of taking on debt. Instead, he offered to work several jobs at the school to pay his way, working as a janitor and tending to various duties around campus. He woke before everyone else to raise the American flag in the morning, and worked tirelessly between classes.

James was also a hardworking student. Before he was finished as a student, he was already helping to teach his classmates. He’s a great role model for anyone in school because he understood that students at different points of their education can work together. Being smart wasn’t as important to him as hard work.

After graduating, Garfield taught at Hiram College, and would later be named President of the college. A few years later, he was convinced to enter local politics, winning a seat in Ohio’s state senate. When the Civil War broke out, he left his senate seat to go fight in the war, where he served with distinction.

After the War, Garfield was elected to the US House of Representatives from Ohio, where he was one of the leading advocates of black suffrage and equality. He was known as a smart, capable man who worked hard to get things done. He wasn’t personally ambitious, and was more concerned with reading, learning, and passing legislation than he was with politics. In fact, when his party came together to choose a nominee for the 1880 election, he didn’t offer himself as a candidate; other people in the party nominated him instead.

Shortly after being elected president, Garfield was shot while going to visit his wife. But he remains one of the most well-read men to ever be President. He was both professor and president of his college, he could read and write in both Latin and Greek, and he loved poetry and literature.

So on this President’s Day, think not only of George Washington and Honest Abe. We should think about some of our other presidents like James A. Garfield, who was a tireless advocate for reading, literacy, and knowledge.