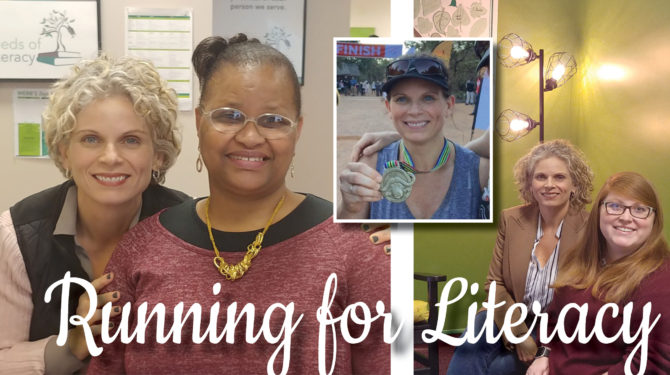 Your past doesn’t define your future. That was the message shared with students, tutors, and staff at Seeds East by a special guest in January.

Pretty amazing. But it wasn’t always that way.

You’d never know it to look at her, but for a long time, her self-esteem was low. For a long time, she repeated the same cycles she tried to escape. For a long time, the only words she felt described her were abuse victim, ex-wife, Hooters waitress, exotic dancer, high school-drop out.

CAUGHT IN A LOOP
Courtney arrived in Cleveland after pointing randomly at a map when she was 17 years old. She hopped on a Greyhound, escaping the only life she knew:  a home in Atlanta, with parents who often fought physically, and a brother heavily involved in drugs. She had already dropped out of school in an effort to keep the peace at home, but it was clear that she needed to start over, somewhere safer.

In Cleveland, Courtney’s roommate — a prostitute — paraded men, drama, and drugs through the apartment. Courtney wasn’t making great choices herself, and it wasn’t long before she realized her situation was no better than when she was in Atlanta.

Recognizing she had to make even bigger changes, or risk falling back into the same cycle, Courtney tried to enlist as an EMT in the National Guard. But it wasn’t meant to be. After the routine entry physical, she found out she was pregnant by her instructor…unbeknownst to her, a married man. Their relationship was dangerous and violent, and produced a son.

Despite her best intentions, she admits she still didn’t make the best decisions.

“I was heavily drinking. Not being a good person. Not being a good parent,” she admits. She worked as an adult entertainer, because she had “no self esteem, no direction, and no drive.” She was tired of trying to do better and not succeeding.

Worried about her grandson, Courtney’s mother moved to Cleveland. But having someone look after her son only made it easier for Courtney’s spiral to continue.

She hooked up with an even more unsavory crowd and found herself in South Beach with drug dealers and guns pointed at her.

“That was a huge wakeup call,” she said. “I used all of my money to buy a Greyhound ticket back to Ohio. I was stealing food at all of the stops just to eat.”

“When I got back to Cleveland, I waitressed at Hooters. Then I added a few more layers and bartended downtown.” She jokes that each job required more clothing than the last —an improvement over dancing.

CHANGING THE NARRATIVE
By the time she was 25, she wanted a father-figure for her son and married the man she’d been dating. It wasn’t the most passionate of marriages, but it wasn’t abusive either. The couple had a daughter and life was more “normal” than Courtney had ever experienced.

Entirely unused to normalcy, Courtney started feeling she wanted more out of life.

An entertainment coupon book unexpectedly provided an opportunity that would change the course of her life: a $50-off flight instruction coupon. She’d always been terrified of flying but challenged herself to give it a try. She was hooked from that very first flight.

“I came home excited, and told my husband this was something I really wanted to do,” she said. “I was willing to pick up extra bar tending shifts just to pay for it. But that didn’t matter to him, he wasn’t supportive.”

The relationship began to deteriorate.

To continue flight school, Courtney picked up even more hours bartending, bringing flashcards to study at work between pouring drinks. She’d come home, study some more, wake the children up for their day, and then go to school. After school she’d be back at work. She was exhausted, but finally doing something better with her life.

“I learned to ask myself better questions. Instead of ‘Why is this happening to me?’ and ‘When will it get better?’, I started thinking ‘What do I want to do? Where do I want to go? And how do I get there?’” she explained. “Asking THOSE questions motivated me to keep up with my new plan. I might not know all the steps to achieve the plan, but I at least had some concrete goals!” She felt in control.

But once she became a pilot, Courtney said she felt like a bit of an imposter. “Other pilots were retired military or highly educated.  I didn’t feel like I fit in.” The industry is also heavily male-dominated.

When she got divorced, she felt even more like an outcast. The voice in her head told her she failed. She still felt like the victim, the adult entertainer, the dropout — only now, she had two children to support. 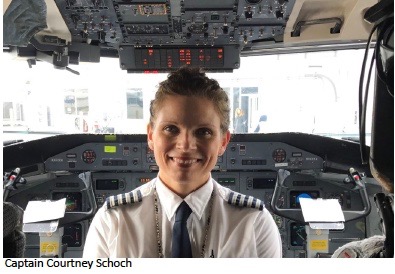 “I enrolled in college for the wrong reasons,” she admits. “I needed the loan money to live.” But regardless of her reasons, education gave Courtney the stability she needed.

Now she holds a Bachelor of Science Degree in Aviation (Utah Valley University), a Master of Aeronautical Science with Specializations in Aerospace Safety Systems and Space Operations (Embry Riddle Aeronautical University in Florida) and a TEFL certificate from León, Nicaragua.

The last certification was earned after an opportunity in 2014 changed the course of her life again. She moved to Nicaragua.

It was what inspired her to earn her Teaching English as a Foreign Language (TEFL) certificate. When she started her nonprofit, Runucate (run + educate), she raised money for educational scholarships in Nicaragua. 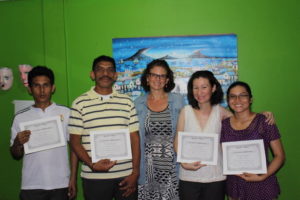 She lived a simpler life. She tutored. She raised money for students. She found love. And best of all, she was able to keep flying — U.S. pilots can live anywhere in the world, as long as they provide their own transportation to their base hub.

Then the political climate in Nicaragua shifted and her life became more dangerous. Courtney witnessed unspeakable things from local paramilitary. Her village and her school were in constant peril. Each time she left Nicaragua for work, she feared she wouldn’t be allowed back.

The fears became a reality in 2018. Courtney left for work and never returned. She left behind a Nicaraguan husband, a scholarship and educational program formed with her nonprofit, and a community. She found herself starting over. Again.

But this time, she was strong enough to do it.

OWNING YOUR STORY SO IT DOESN’T OWN YOU
Although her profession is being a pilot, Courtney’s passion is her nonprofit. Through Runucate, she raises awareness and funds for organizations that fight illiteracy, by running marathons all over the world. Less than a year back in the States and the Nicaraguan school closed, she renewed her focus on Runucate and looked for a new organization to support — and organization like Seeds. 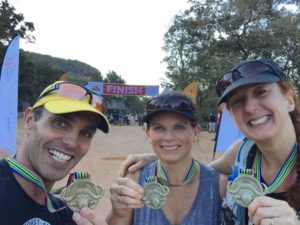 She finds running therapeutic and she recently joined the Seven Continents Club, committing herself to running a marathon on every continent over the next four years. She’s already completed marathons in the US, South Africa, and most recently, Bagan Myanmar.

Her next marathon is Easter Island, and Seeds is part of her journey. To offset the costs of the trip, she’ll fundraise, donating 90% of the funds to adult education at Seeds of Literacy.

The Seeds partnership with Runucate includes Courtney sharing her story with Seeds students and tutors, many of whom quickly realized Courtney understood their very real struggles.

Seeds is looking forward to working with Courtney and Runucate more in the future!