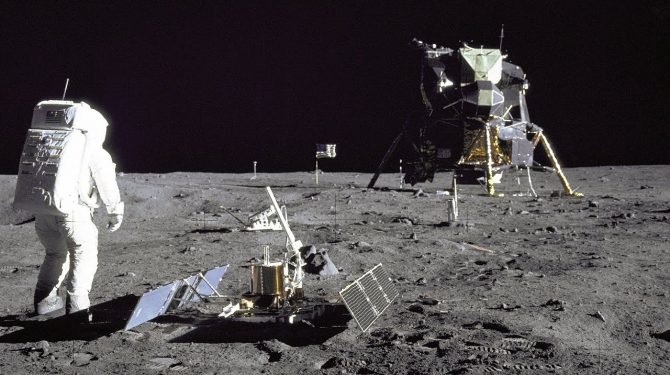 The designers of the rocket used to go to the moon had to change their plans often.  The lead designer, Wernher Van Braun, originally wanted to build a rocket called the “Nova” with eight giant engines (the eventual rocket we used, the Saturn V, had five).  However, an engineer named John Houbolt realized that we could reduce the size of the ship needed to land on the moon if NASA used a technique called Lunar Orbit Rendezvous.  This would require the astronauts to learn how to dock their spacecraft in the orbit of the moon; something many didn’t even believe was possible. However, while Lunar Rendezvous would make the astronauts’ job harder, it would make almost every other part of the program easier, and would require a lot less fuel to get to the moon.  Instead of sticking to his original plan, Wernher Van Braun was willing to listen to this alternative idea. Eventually, he became convinced that this was the right way to go, and reduced the size of the rocket (now called the Saturn V) down into something far more manageable.

Of course, it wasn’t exactly smooth-sailing from there.  The second Saturn V rocket vibrated so violently on take-off that any humans riding on board would have been killed.  Thankfully, this was an unmanned test, but everyone at NASA was troubled by this problem. However, instead of giving up, the engineers got to work finding out what went wrong.  By the time the next Saturn V launched, the problem had been fixed.

And as for the astronauts themselves, while they were all well-educated, their experiences through school were very different from what might be called “traditional.”

Take Pete Conrad, one of the astronauts who landed on the moon on Apollo 12.  Conrad wasn’t dumb, but he was a poor student. Tests would reveal that his struggles were caused by a severe case of dyslexia, which was so severe that he flunked out of high school in the 11th grade.  It wasn’t until his mother found an alternative school set up to accommodate his condition that he was able to succeed.

Stony Musgrave, who trained for the Apollo and Skylab programs, was another high school dropout.  He didn’t suffer from dyslexia, but life managed to get in the way. It wouldn’t be until several years had passed that he decided to earn his High School Equivalency Diploma, passing the GED.  Stony would later help design the modern space suits that American astronauts wear to this day, as well as flying on the Space Shuttle 6 times.

Which is all to say that even the greatest accomplishments of human-kind often come only after significant failure, frustration, and disappointment.  But instead of letting the story end there, the people involved in the space program refused to give up. They continued to push against adversity, and their accomplishment is all the greater for it.

Many adult education students have felt frustrated, have been faced delays, and have struggled mightily only to come up short.  But what amazes me, what inspires me, is that every student at Seeds of Literacy is working to improve themselves, no matter what adversity they’ve faced.  Even when giving up might seem easier, even when they’ve been frustrated by an endless barrage of tests, they continue to come and work and strive towards something better.

Success isn’t the result of never falling down, it’s what happens when you keep getting up again, especially when it’s hard.

This weekend, a lot of eyes will turn their way up towards the moon and marvel at the fantastic accomplishment of 1969, as well they should.  But we should also remember that this same drive, this same hope and desire, can be found right here around us. All it takes is a willingness to look.