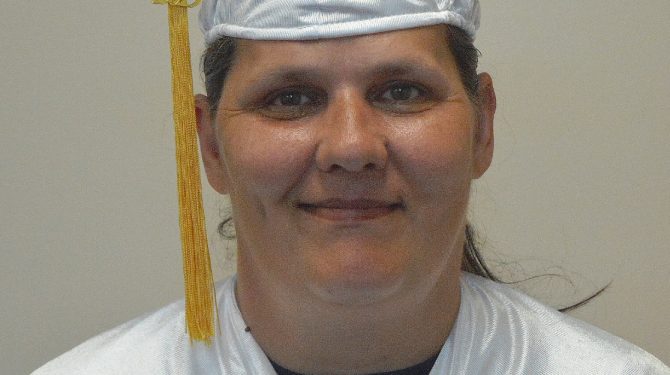 I don’t remember exactly when I first met Rose Copley. That’s how much of a fixture she was in the Seeds West classroom when, a year and a half ago, I started working there. At some point I just realized that she was a constant presence: bent over a packet for hours, socializing with fellow students, and always, always refilling her coffee cup. She’d been a student for four years, going on five. She’d passed three of the GED’s four sections. All she had to pass was the Math.

At the time, I didn’t know Rose’s story. I didn’t know her home life was so contentious that as a teenager, she found herself at Parmadale, the now-defunct group home for children in desperate situations. She ran away from there at 16, stayed with a friend’s family, and “did the thing you do”: met a man, had a kid at 18.

Rose would go on to have four children, and for many years, her focus was almost exclusively on raising them. “No one said ‘Rose, go out and get some job skills,’” she told me. I know Rose as a woman who laughs gruffly and takes group cigarette breaks, so I’m surprised when she tells me she had few friends in those years. “I had no self-esteem,” she says. “I wasn’t all about putting myself out there.”

One friend she did have was her next-door neighbor. It was the neighbor who first told her about an organization on Clark called Seeds of Literacy.

By this point, Rose’s kids were mostly grown. That fact coupled with a near-death experience—aneurysm, followed almost immediately by a stroke—helped her decide to give the GED thing a shot.

For the first week or so at Seeds, Rose kept to herself. “I’m the kind of person who has to warm up a bit,” she says. Mostly, she just watched people. Then, she warmed up. “And I been agitating y’all ever since,” she quips.

At Seeds, Rose found a group of friends to sit and chat with while doing packets. In site coordinator Chris Richards, she found an instructor she could respect. She made coming to Seeds a near-daily routine.

She can’t quite remember when she crossed over from, as she puts it, “’I’m gonna get my GED’ to ‘I need this GED.’” But it was an important switch. In 2016, Rose passed the Language Arts section. Some months later, she passed Social Studies and Science. All that was left was Math, commonly considered the most difficult of the sections.

“Math was a killer,” Rose says. She’d take a practice test and miss a passing score by just a few points. Computer screens gave her headaches—an aftereffect of the aneurysm and some earlier head trauma—but for the GED, computers were her only option. Then, things got really hard. She lost her housing, and she decided to stay with her daughter in Kentucky for a while. People were nice, she said, but she wasn’t getting the math help she needed. She realized, “I gotta do this in Cleveland.”

Rose made her way back to Northeast Ohio, but there were still challenges. She moved from place to place, many of them a far bus ride from Seeds. She came to class whenever she could afford the bus tickets. Some days, when she couldn’t, she would walk for miles to get here.

As 2019 graduation approached, Rose became even more determined. Frequent tutors Carol and Gene Dodaro took note. “She said, ‘I am going to graduate with the next group,’” Gene said. In April, she took a practice test and passed. She didn’t pass the official test two weeks later. She doubled down on studying and passed another practice test in mid-June. On June 24, she sat for the official Math test one last time.

Two days before graduation, she became the final member of the Seeds Class of 2019.

Even with the GED, there are still challenges for Rose to face. Since graduating, she’s turned her efforts to finding permanent housing and applying for jobs. One thing hasn’t changed: she’s at Seeds almost every day. But this time, she’s tutoring.

As a tutor, Rose has the advantage of being a former student. “I can say, ‘Let me show you how I learned it,’” she says. “People connect to that.” The Dodaros find Rose’s style to be effective. “She doesn’t let people slide. She doesn’t let herself slide,” says Gene. Carol adds: “She does it with good humor. She can kid around, but [students] know when she means business.”

At Seeds, we take in students knowing that one day, they’ll have to leave. We hope that they take with them an education that will improve their lives. But sometimes, they take more than that. “I made friends here I can keep,” says Rose. Her self-esteem is different, too: “I feel better walking down the street,” she says. “I can hold my head high.”

Rose is eager to get a job, but a little sad about it too. It means she’ll have less time to tutor at Seeds.

When I ask does she mind spending so much time here, she laughs and shakes her head. “This is my happy place anyway.”