“Is the GED Still Relevant?” on The Sound of Ideas 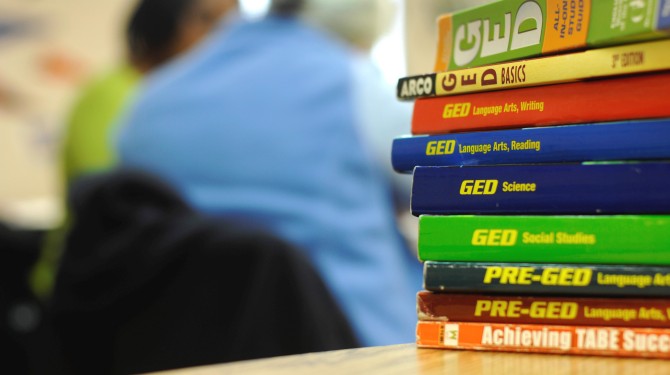 Seeds of Literacy’s Executive Director Bonnie Entler joined 90.3 WCPN’s The Sound of Ideas earlier this week as part of a discussion on how well the GED exam prepares people for college and career.

The episode, titled “Is the GED Still Relevant?”, featured as its primary contributors economists John Eric Humphries and Tim Kautz, two co-editors of the book The Myth of Achievement Tests: The GED and the Role of Character in American Life. (The book’s third editor, Nobel Laureate James Heckman, was scheduled to also participate in the show but did not join the discussion.)

The discussion was lively, with Mr. Humphries and Mr. Kautz’s main argument being that while the GED is an indicator that a person possesses certain academic skills, the test does not account for other qualities necessary for career and college success.

Ms. Entler spoke to Seeds of Literacy’s 18 years of experience in adult education and the thousands of adults who have improved their skills through the program.

“The students at Seeds of Literacy, they’re not really dropping out knowing that the GED is their goal,” she answered to the claim that high school students see the GED as an easy alternative, which incentivises them to leave before graduating. “They drop out for a variety of different reasons. It could be academic boredom, it could be early pregnancy, it could be drug and alcohol related, health issues. So their goal is not just to say, I’m not going to graduate from high school, I’ll just go get a GED. They drop out of school  for a variety of other reasons.”

Other conclusions in the economists’ argument differed from what Seeds of Literacy sees daily in its students.

“It’s not just reading and writing and arithmetic,” Mr. Humphries said about the skills indicated by a high school diploma. “It’s time management and anger management, and many soft skills that are important not just in high school but in the job, and we think that these skills are commonly missed by the GED.”

Ms. Entler, working with adult students daily, explained that Seeds of Literacy’s students — and many adults preparing for the GED test — are living in difficult circumstances and possess remarkable skills that are often overlooked by traditional standards.

She continued, “We really try to encourage our students to look at the GED as a first step on to a variety of opportunities, but our students are dealing with a variety of other issues. Not only academics, but the traditional childcare, housing issue, food issues, so they have whole adult issues that they’re dealing with on top of their education. So that really factors into their ability to complete things.

“But the majority of GED students that we come across are really looking into those certificate programs — something that’s very quick that they can get through so they can get a job.”

If, as Ms. Entler has seen at Seeds of Literacy, people are working hard to earn a GED and obtain employment rather than four-year college degrees,  maybe our discussions about the GED aren’t addressing the right issues.

Perhaps the question isn’t if the GED is relevant, but rather, what are GED test-takers aiming to accomplish?

You can listen to the episode on The Sound of Idea’s website.

Each year, Union Home Mortgage recruits more than a hundred summer interns into their L.E.A.D. Internship Program. Program participants are provided with mentors, a variety …