Why We Celebrate Indigenous Peoples’ Day 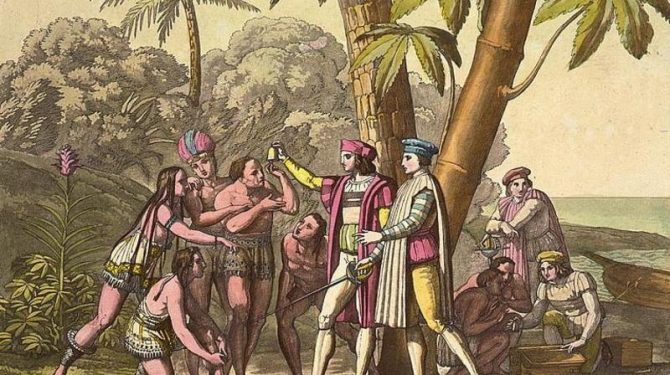 As far back as the 16th century, people have weighed that question. As much as Romeo and Juliet fought against it, their names mattered a great deal. Names serve as a first impression and a lasting reminder. A name can be overshadowed by the identities it’s been tied to.

This year, like every year, Seeds of Literacy will be open on the second Monday in October. Unlike years past, however, we’re not referring to this as Columbus Day.

Children in America learn a simple story: “In 1492, Columbus sailed the ocean blue…” We learn that people thought that the world was flat; that people warned Columbus of falling off the earth; that Christopher Columbus discovered America. These stories provide a clear, simple story about the beginning of our nation’s history.

Except they’re not true. The shape of the world was well-known in Columbus’s time, and he was warned because his calculations for the Earth grossly misjudged its size. Without North and South America, Columbus would’ve run out of food and water long before he reached the East Indies. More importantly, Columbus didn’t “discover” America. It’s unknown how many people visited our shores before he did, but there were tens of millions of people living here, and Leif Erickson beat Columbus by about 500 years.

People have suggested calling this Leif Erickson Day instead, but that would miss the larger point of why Columbus is actually important. He might’ve been wrong, but he had a huge historical impact. Once he proved that the New World could be reached successfully, a vast mingling of cultures, ideas, plants, animals, and peoples began, one which marks the beginning of what we’d now call globalization. From tomatoes and horses, smallpox and slaves, it all crossed the Atlantic following Columbus’s journey. This begs the question, why we’d want to change the name at all?

Columbus’s impact is undeniable, but the legacy he left behind is darker than most of us learned in grade school. During his first days in America, Columbus’s journal provides fascinating, often disturbing insights on his view of the people he found here.

October 11th – “They were very friendly to us…

Weapons they have none, nor are acquainted with them, for I showed them swords which they grasped by the blades, and cut themselves through ignorance. They are all of a good size and stature, and handsomely formed. It appears to me, that the people are ingenious, and would be good servants…”

October 14th – “The people here are simple in war-like matters, as your Highnesses will see by those seven which I have ordered to be taken and carried to Spain in order to learn our language and return…unless your Highnesses should choose to have them held captive…I could conquer the whole of them with fifty men, and govern them as I pleased…” [emphasis added].

Columbus’s attitude towards the locals is that they are smart and capable. He quickly decides that they would make good slaves. This is the real Christopher Columbus.

History is full of unpleasant truths like these. Calling the second Monday in October Indigenous Peoples’ Day doesn’t erase uncomfortable topics from our history – quite the opposite. When we call it Columbus Day, we continue to honor the simple image that most of us learned in grade school. Changing the name encourages a conversation about our past, about who we are and where we came from.

Further, it’s important to note that the United States has two federal holidays named after specific people: Martin Luther King Day and Columbus Day. The legacy of these two men stand in stark contrast. Our holidays are meant to honor our heritage, and ours promotes freedom, equality, and over time, diversity. Indigenous Peoples’ Day honors those who history too often overlooks, the millions of Americans who lived here before Columbus and before Erickson. America is not just a country of European immigrants; whether they came by the Bering Strait from Asia or crowded steamships from Europe, most of us trace our personal history by the journey our ancestors took to come here.

Seeds of Literacy’s mission is to empower those without a voice, to help people take greater control over their lives through the dynamic effects of education. In that way, Indigenous Peoples’ Day serves our mission twice over: it is an opportunity to teach everyone about our rich, often complex history, and it is a chance to give greater voice to those we often don’t hear.

We hope that you’ll join us in celebrating Indigenous People’s Day, and to make America’s future stronger through the power of education.