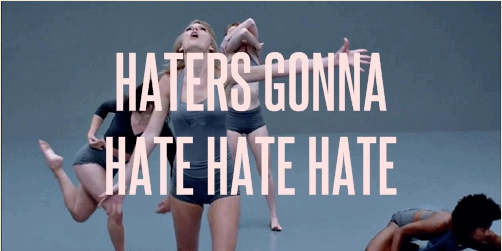 (Or, What Taylor Swift Can Teach Us about Adult Education)

Everyone knows that the comments sections of an online article is where you go if you want your soul to die a little.

For articles on adult basic education, and the GED in particular, a certain brand of nastiness regularly exposes itself in the comments.

“When a employer sees a GED on a application they know they are looking at someone who will not finish anything.”
–On an article about the need for GED preparation in prisons

“If given the choice, will you surround yourself with idiots, uneducated, slovenly, etc. or with educated, employed, caring people? If you prefer the latter, would you be willing to pay for that circumstance?”
–On an article about how the GED exam tripled in cost when Pearson purchased the exam in 2013

“If those who have dropped out of school or who didn’t learn to read or compute during the few years they did attend school would stop having a child as their first priority to enter the welfare system literacy would drop significantly.”
–On an editorial by the Literacy Cooperative about the need to improve Cleveland literacy rates

These comments are likely grounded in the commentators’ own stereotypes and prejudices about the character of people who need GEDs. And, as we unfortunately know, this kind of vitriolic thinking isn’t quarantined to the internet.

These comments do not take into account just how much effort and determination, how much flat-out work, goes into passing the GED test for most adults. They already have an idea of what adult students and GED-holders look like, and they refuse to acknowledge anything that exists outside of that pre-determined mold.

What these vocal naysayers should see when looking at a person who earned a GED is this: a father who realized the value of an education.

A mother who went back to study for it while juggling family and work.

A grandparent who must  jump through hoops just to survive.

We do not benefit from disparaging the achievement of a GED. No one does. So why can’t we recognize hard work when we see it? Why can’t we believe in the reality of the challenges these adults face? Why can’t we elevate everyone’s efforts instead of choosing to tear one kind down?

Maybe it’s part of human nature to identify a group from which to separate ourselves and, by contrast, feel superior. Maybe it’s inevitable that there will be haters who will, indeed, hate.

But earning a GED? That’s not something to shake off.