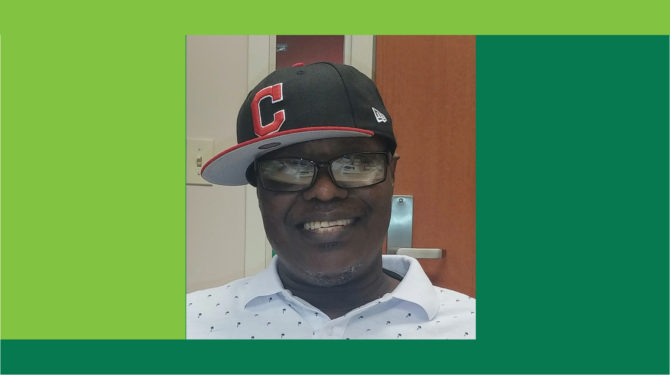 Seeds student Demetrius Pate, Sr. has had a series of jobs in the food service industry. In the last year alone, he had (and lost) two. For a while he worked at a college, but the job was just seasonal. It took some time to find his next job at Steak-n-Shake. Then, two weeks ago, they announced they were ceasing operations. But even though he was unemployed again, he still came to class smiling.

For the last two years, Demetrius has been a fixture in the Seeds East classroom. He’s eager to get involved and quick to make friends. He’s an original member of the Book Club and is an active participant in weekly meetings. He was also selected to serve on the Student Leadership Committee. Last fall, he became a published author after he submitted an essay to Cleveland Stories Vol. 1, published by Literary Cleveland.

Demetrius is a Deacon at the historic Beulah Missionary Baptist Church, where he also sings in the church choir. “I’m going to be the president of our Usher Board soon, too,” he proudly said. He does all of these things in addition to coming to class, usually four days a week.

He hasn’t passed any sections of the GED yet, but that’s ok by him. It’s the reason he came to Seeds in the first place.

“When I went to other programs, I couldn’t keep up,” he said. “The other students were way ahead. But here? Here they treat me with lots of respect. I learn at my own speed. The tutors take their time with me.”

When asked why he left school in the 11th grade, he just shakes his head, at a loss for words. “Being young, chasin’ women, getting into all the trouble young men should avoid,” he admitted after a long pause. “Looking back, I hate that I didn’t finish. I just hate it! I didn’t hang in.”

The 51-year-old insisted his sons understand the value of education and he practices what he preaches by coming to Seeds. He has two adult children and another who is a senior in high school. His oldest is getting his master’s degree in marketing. His middle son earned an MBA after earning an undergraduate degree in sports management. He’s proud of them. And they couldn’t be more proud of their dad for returning to school, “for as long as it takes,” he said.

Demetrius has formed a tight-knit support system at Seeds. When he lost his job at Steak-n-Shake, we were among the first to know. And, we had just the solution.

Seeds of Literacy began an important partnership with Goodwill Industries earlier this year. As part of the partnership, students receive targeted soft-skills training and career counseling. Experienced Job Development Reps work with students on how to dress for success, prepare cover letters and resumes, and how to search for jobs online.

“I brought my resume in for Karen [the Goodwill rep] to look at and she helped me make it better,” he said. After the meeting, Digital Literacy Coordinator Scott Sanborn helped him with online applications.

It’s important to note that Demetrius Pate Sr. is always smiling. It makes everyone else smile, too.

Today, he has a reason to smile.

Today, Demetrius got a call from Cleveland’s largest employer, offering him a job as a line cook.