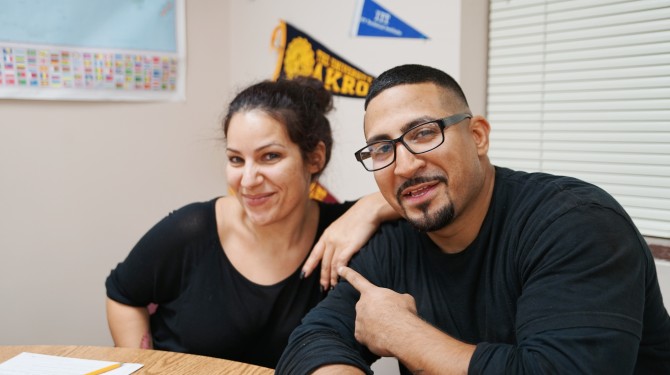 Batman and Robin? Please. Real-life heroes work a little differently, and Seeds of Literacy has its own dynamic duo in Eric and Amy Melendez, a brother-sister team who draw on their shared love of learning to attend classes at Seeds nearly every day.

They are smart and driven, with the only thing stronger than their dedication to earning a GED being their support for each other.

It wasn’t always like this, though, and Eric is unafraid to lay bare his past.

“I got in trouble a lot, and was in and out of the 8th and 9th grades for a few years. At that point in my life, I didn’t think school was important.”

He talks about his involvement in the juvenile justice system, less-than-successful educational programs, and becoming a father at a young age. “After that, school was behind me,” he says. “I had to work to take care of my family.”

For Amy, being in foster care as a teenager and moving from home to home — sometimes even from state to state — made junior high difficult.  She worked on her diploma by correspondence course and homeschooling, but soon after her 18th birthday, Amy had her first child and stopped thinking about school.

Both Amy and Eric found themselves as young parents without a high school diploma. Nearly a decade of low-paying jobs followed for Eric: pizza delivery, temporary factory work, dishwasher, and cook. Eric wished to return to school, but unpredictable schedules and family obligations filled his days and nights.

“I knew what I needed to take me where I want to go: my GED.” So when Eric was laid off, he decided to take action. “I’m utilizing this time to get rid of something that is weighing me down – not having a GED. This is a challenge, but I desperately need to have it.”

After attending a traditional, classroom-based GED program, Eric found Seeds of Literacy through a flyer his wife picked up at the library. “Seeds is amazing, honestly. It’s in the air – everyone here wants to learn. Not only are the tutors friendly, but the students are as well. Everyone’s on a mission here.”

He wanted to share that mission with his sister. “Eric told me about Seeds one day,” says Amy. “I was debating whether I should start my GED. I was worried about getting to and from school and thought, why should I start something that I can’t finish? But Eric said he’d bring me.”

Together, they grew more confident.

“I wasn’t too motivated when I first started at Seeds,” admits Amy. “But I found out that I was smarter than I thought!”

Amy’s self confidence rose, and she realized that her advanced language and reading skills would help her reach her GED goal. Working individually with a tutor gave Amy that extra boost of help, inspiration, and patience that she needed.

Her brother feels the same. “This place keeps me motivated and coming back,” says Eric. “What I love is that the staff sees something in students that they don’t see within themselves. At the beginning, I’d come and see progress, but then I got petrified when I had to write. [Site Coordinator] Sharon kept figuring out ways to encourage me and explain what I needed to do. [Retention Coordinator] Jeff called when I didn’t come to class and told me there was always another way to teach and learn, and to come back. So I did!”

Eric conquered his reticence to write and passed the Language Arts portion of the GED, with its dreaded essays. He is now concentrating on the Social Studies section, which also requires lengthy written responses. He knows that you have to keep going and work through what seems tough. “You don’t want to be stale-minded. You’ve got to keep feeding your mind.”

And by coming to Seeds, Eric and Amy have learned more than just Social Studies and writing — they’re also learning about themselves and just how very much they’re capable of.

“I’ve always been a dependent person who thought I didn’t know too much,” reveals Amy. That image of herself is now gone, and like her brother Eric encouraging her to join him at Seeds, Amy is sharing her mission with her family. “I want to raise my five children to be independent. I am determined to finish school, no matter how late in the game I started.”

“When I came to Seeds, I thought it was impossible,” Amy says. “Now I have dreams.”

You can help make the dreams of our students a reality with a donation to Seeds of Literacy.