Education in Kabul: Angels Are Made of Light Film Review 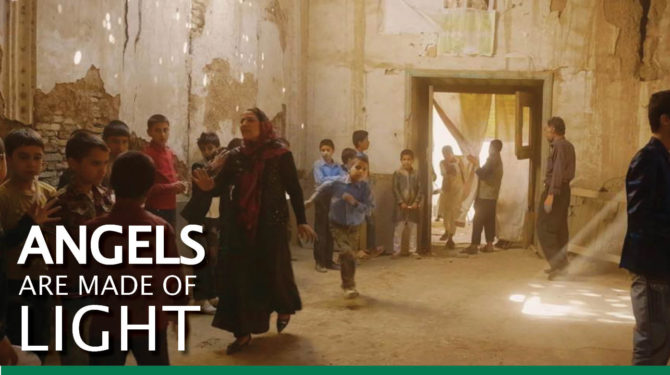 [FILM REVIEW] Now that the 43rd annual Cleveland International Film Fest has wrapped up, it’s safe to say that Angels Are Made of Light, Seeds of Literacy’s sponsored film this year, was not the happiest film in the lineup. Angels chronicles the lives of the students and teachers at a school in Kabul, Afghanistan.

There’s a format to American movies about education. From Dangerous Minds to Freedom Writers, there’s no shortage of underdog stories of teachers and students struggling against the societal circumstances of their school. We enjoy these movies because, typically, the teacher earns the students’ respect, the students learn some valuable lessons, and things end on an optimistic note.

Angels is not that movie. Michelle Pfeiffer doesn’t come in to save the day. Robin Williams delivers no “O captain my captain!” speeches. No one raps. Instead, we are taken on a somewhat impressionistic journey of a school and a nation in difficult transition. Afghanistan’s larger concerns of democracy, corruption, and violence play out in smaller ways in the crumbling school building in which Angels is set.

Rather than a singular hero to cheer for, we drift in and out of the lives of students whose families are struggling to feed them and teachers barely being paid enough to get by. One boy is unable to attend school because his parents can’t afford to buy a book bag. One boy has to spend all his time outside school getting ripped off by customers at his father’s food stand. And one boy, a dreamer who is one of the strongest students in his class, ultimately has to leave school to work in his father’s auto body shop.

Anecdotally, audience response on leaving this film was not positive. “It needed an editor,” my seatmate said, and I heard this echoed at least twice walking out to the lobby. But what these viewers might not have realized is the epic scope of director James Longley’s efforts. The two hours of Angels are woven together from three years of filming and over 500 hours of filmed material.

The footage, too, is incredible. There are no grainy, handheld shots in this doc. The shots are as beautifully composed as a big-name arthouse movie. Voiceovers from unscripted character interviews play over footage as if to make a perfectly natural internal monologue.

The images are beautiful, but the content is hard to watch. Violent extremism breaks in when we least expect it. Students we’ve come to cheer for are forced to abandon their studies. When the story ends, the school, like Afghanistan itself, faces a future that’s far from certain.

Though they’re half a world away, many of our students at Seeds have faced similar struggles. Some had to make the impossible choice of furthering their education or providing for their families. Some were displaced by the violence of their neighborhoods. Many face a long and challenging path of learning or re-learning several years’ worth of missed education. And at any time, circumstances similar to what took them away from school in the first place might resurface to do so again.

Whether in Kabul or in Cleveland, the key to a better life is education. At Seeds, we believe that every student deserves a chance at a better life. While we may not succeed every time, we are working so that every one of our students is able to achieve their high school equivalency. And when the circumstances look dire, our partners, our students, and our volunteers–angels in their own right–give us reasons to hope.