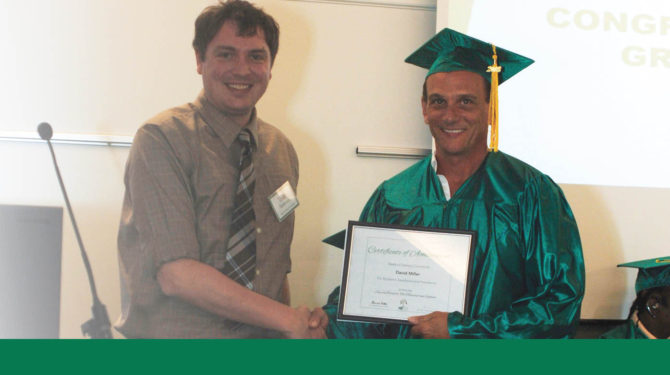 Setting Up for Success
Getting pumped to go back and earn a high school equivalency wasn’t easy. He’d tried it twice before but never finished.

Dave knew himself well enough to know that coming for tutoring once in awhile wasn’t going to cut it. “There was no way I could make progress with a few hours here, a few hours there. I changed my life to focus solely on this. Get it done and then move on!”

His story is typical of many of Seeds’ students that had to drop out to take care of family members, or go to work to support the household. Dave had dropped out of school after 6th grade to start working.

For 35 years, he performed back-breaking manual labor in the steel mills. Eventually the steel mills began shutting down their furnaces, leaving him out of work.

With work ending, he felt it was finally a good time to go back to school. “But I thought about it again for a solid month before I psyched myself up to go,” he admitted. “I knew if I was going to do it, I was going to do it 100%. And that meant having the right mindset.”

Dave changed a lot in his life to increase his chances for success. He eliminated his social life, and dedicated himself to class, setting a schedule that had him attending 6 hours a day, 4 days a week. And he did not rest on weekends. “At least 20 hours studying Friday through Sunday. Sometimes I studied 9am – 9pm,” he said.

Students always ask about the best order in which to take the tests. For some, they want to get the subjects they find easiest out of the way, building their confidence and their momentum along the way. In fact, there are currently 16 students at Seeds East who have passed all subjects EXCEPT for Math.

Dave had a different approach. He ate the frog first.

Eating the frog is an expression that means doing the hardest thing first, the most challenging, the thing that scares you the most. For Dave, that was Math.

“It was my biggest fear. If I couldn’t get through Math, why waste my time with everything else?” he said. “I didn’t want an uphill battle. So I started with the hardest part, knowing it would only get easier.”

He spent 3 months studying full-time for the Math portion of the GED. “I knew that for me, a break would be devastating and I’d have to start over. I went into attack mode. And I attacked Math.”

A Plan of Attack

After he graduated, Dave returned to Seeds to share his strategies with the students who are still struggling to complete Math.

(1) Be Open To Help:
“On my first day of class, I put my pride aside and walked up to a table with tutors. I introduced myself. I talked to everyone. I started making friends with other students, learning who was good at what, and most importantly, I never hesitated to raise my hand for help.”

(2) Accept That Earning an HSE Takes Time
“Like a lot of students, I had to accept that I couldn’t come in here and finish the entire program in just two weeks. People think it will be quick, they want it to be quick. But once you accept that it takes time and effort, it’s different. It’s not as frustrating when you are honest with yourself.”

(3) Take Advantage of Extra Seeds’ Activities
Seeds tutors often volunteer extra time to hold demonstrations and lessons on the TI-30XS, the only calculator permitted for use on the HSE exam. Seeds East also holds a weekly math club after morning class.

“Every time there was a calculator lesson, I went. To all of them. Even if we were going over the same functions as the last time.”

(4) Use Online Resources
“Outside of class, weekends and evenings, I used Khan Academy and YouTube at home,” he said. “And I’m not super tech literate! YouTube is so great because everyone knows what it is so it’s less intimidating.” Dave spent hours watching videos, pausing them to take notes and practice questions on his own.

“I’d type something into the search bar, like fractions or polynomials, and there would be video after video demonstrating how to do them. I need to hear things several times before I learn them so this was perfect.”

And, he used his phone. “I downloaded Math apps,” he said. “Whenever I had a few minutes, I’d practice. It was way better than wasting time on Facebook.”

When Each Quiz Is a Struggle
Despite the 24 hours a week he spent in tutoring, 20 plus hours a week at home on the internet, attending extra sessions, and talking to those who had taken and passed the tests, Dave admitted that he still lacked confidence with Math.

“At no point did I feel comfortable,” he said. “Each mastery quiz was a struggle. It was always a surprise when I passed. When I passed the practice test, I was convinced it was a mistake and I was not ready to take the real thing.”

More than once, Dave argued with himself and pushed himself to continue. He knew he had to keep moving to finish Math – the hardest part — and the rest would be easier.

When the time finally came to take the official GED Math test, he waited anxiously for the results. Typically test results are available within an hour or so of the exam. A system glitch delayed Dave’s results for several days, so he simply returned to class the next week, and asked for more math packets. “Of course I was convinced I’d failed,” he said.

He was wrong. He passed.

Dave went on to tackle Science, Social Studies, and Reading Language Arts with the same strategies as he had used with Math. And he was right, it got easier.

Dave Miller was one of 57 graduates in 2018. He wore a cap and gown for the ceremony in June.

As a graduate, he’s now an ambassador for Seeds, participating in a leadership program, talking to new students at Orientation, and attending community events to tell others about the program.

This fall, his job hunt will begin. “I did hard labor for decades, and now I want to find a job that doesn’t kill my back,” he said. He’s working on his resume, and with a GED in hand, his options are no longer limited.

[8/29/18 update: Dave appeared with Executive Director Bonnie Entler on Live on Lakeside to discuss the importance of adult literacy and his personal journey. Watch the segment here.]