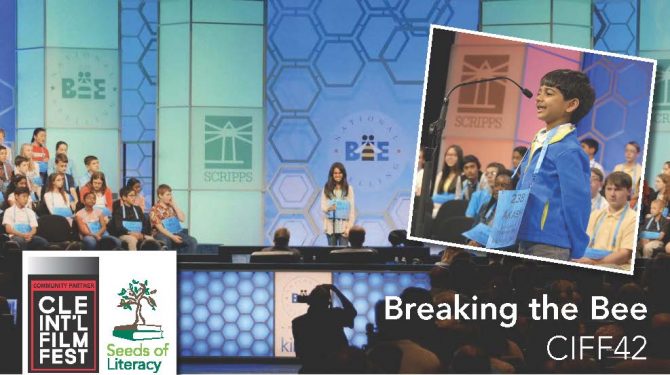 [Watch the trailer, below]

Breaking the Bee, the feature-length documentary from Sam Rega and Chris Weller, got a hearty Cleveland welcome at its CIFF world premiere last week, and Seeds of Literacy was in the sold-out theater to celebrate. As a Community Partner for the Cleveland International Film Festival, we were thrilled to sponsor this warm-hearted doc about spelling bees, the driven kids who compete in them, and the extraordinary success of the Indian-American community.

On the surface, the partnership is something of an odd pairing. Breaking the Bee is about the trend of Indian-American domination in the Scripps National Spelling Bee for the past two decades. Indian-American children have won 18 of the last 22 national

bees—the Patriots can’t claim to have a dynasty that good.

Its subjects are students training to compete in the upcoming spelling bee, from the precocious Akash, who made a dapper, suit-clad appearance at the premiere, to the charismatic Shourav, whom friends call “the Michael Jordan of spelling bees.” It’s impossible not to cheer for these kids from the moment you meet them, and Regas’ filmmaking makes watching them compete into viewing experience that is, at turns, suspenseful, heartbreaking, and thrilling.

On the other hand, Seeds of Literacy’s focus is adult education. These students didn’t finish high school. Many of them live in poverty.

All of which makes the Breaking the Bee/Seeds team-up a strange juxtaposition. It’s a stark contrast of the 1%—the percentage of Indian-Americans in the total US population—and the 66%—the percentage of functionally illiterate adults in the city of Cleveland.

But academic success is not a limited resource. It can be attained at any age. The focus of Breaking the Bee might be very specific, but its success lies in tapping into themes that are universal. Its takeaways apply as much to the next champion of the Scripps National Spelling Bee as they do to the next student enrolling in adult ed classes at Seeds.

A key to the success of Breaking the Bee’s spelling stars, the documentary finds, is simply hard work. They put in hours every day to ensure success. Our students at Seeds are doing the same thing to work toward their high school equivalencies.

Parents play a big role in Breaking the Bee, as well. They spend hours encouraging their kids and helping them to devise study systems. They’re completely vested in their children’s success.

Talk to a student at Seeds, and odds are there’s a child or two in their home motivating them to come to class. The universal desire of parents to improve their children’s lives is a powerful theme from Breaking the Bee, and it’s one we see in action at Seeds every day.

And of course, prejudice rears its ugly head in Breaking the Bee, as well. The film’s spelling bee champions face racist comments from online detractors who see them as somehow lesser. Students studying for their high school equivalency—and, somehow, even the ones who’ve obtained it—face animosity and unkindness, as well.

And if we keep it up, in one way or another, we are all going to be victorious.

Watch the trailer for Breaking the Bee, below.

RELATED:
Director Sam Rega on WCPN’s Sound of Ideas
Breaking the Bee on Facebook
Sign up for the newsletter