Breaking Grammar: Our Values in Language 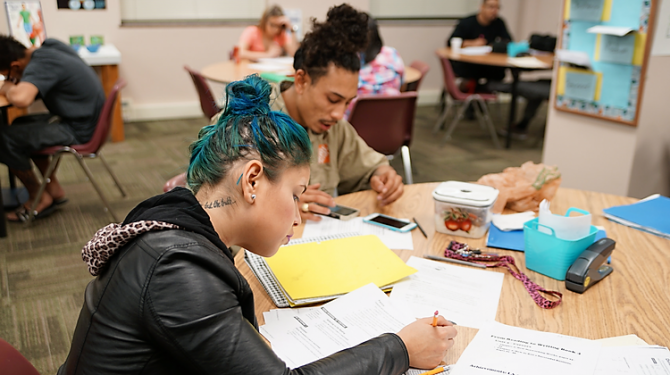 I’ve written most of the posts here since Seeds of Literacy’s blog launched over a year ago, and the whole time I’ve been waiting for someone to call me out on something, like I’ve been harboring a fugitive.

Well, no more hiding. It’s time I turn in my grammar outlaw.

As a literacy agency and GED® preparation program, we teach the rules of English grammar. We’re also expected to uphold those rules — to practice what we preach. But there are times when the limitations of language hinder what we truly wish to express.

Words allow us to communicate ideas, but they also communicate values. One of Seeds of Literacy’s core values is inclusiveness, and to practice that value and include any and all genders in my writing is more important than following a musty grammar rule (one that is increasingly falling to the wayside).

There are times when the limitations of language hinder what we truly wish to express.

When I was in the 9th grade (a trip not too far in the way-back machine,) my English teacher was a woman in her late 50s or early 60s. She was a little old school, and told us that we should use “he” as the default singular pronoun in our writing. So I did, for years, until I decided that to do so went against my value of equality because it prioritized one gender. Later I used “one” or “he or she,” but they felt cold or clunky.

More recently, in my job and personal writing, I’ve switched to using “they” as a singular, gender-neutral pronoun, even though strict grammarians would jump to tell me it’s incorrect, which would be embarrassing for a literacy agency.

However, language is a product of culture, and culture changes, because people change. There’s a fascinating interplay between how the words we use shape our ideas, and how our shifting ideas evolve our language. I imagine there’s rarely a clear delineation between their causes and effects on each other.

I realize my 9th-grade English teacher taught us “he” as the standard because that must have been what she was taught in school in the 1950s.

Language is a product of culture, and culture changes, because people change.

Ideas for what’s right, normal, or standard get passed down and we get the impression that’s how it’s always been. But language matters, and language changes, and we can be deliberate in our words in order to shape language to better reflect our ideals.

I wish the English language had a built-in gender-neutral singular pronoun so I could practice inclusive language without the grammar stickler in me piping up. Alas, it doesn’t, so I need to weigh my values and prioritize. And I’m not alone: it’s common for people to slide into using “they” as singular, even unintentionally — reaching for a word that surely must exist in our language, one that allows us to talk about people without specifying gender.

Yes, Seeds is a literacy agency, and we need to teach the grammar rules that keep ideas in line so they don’t wander off into incomprehensible territory. But the cool thing about knowing the rules is that once you do, you also know when to break them.

So, for now, them’s the final word.