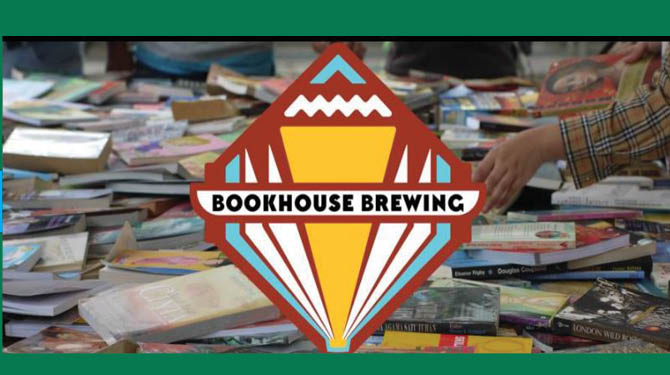 At Seeds, our budget comes from donations. So when it comes to raising money-sometimes we have to get crafty. And what better way to do that … than with craft beers?

That’s what we’re doing this Tuesday at the Sip for Seeds and Book Swap at Bookhouse Brewing! Bookhouse will donate $1 to Seeds for every beer poured. But that’s not all! Attendees can bring a book–or several–and make exchanges with other book-loving patrons. To review: books, charity, and beer. That’s a winning combination!

Bookhouse is, as far as Cleveland breweries go, something of a perfect partner for Seeds. And not just because they were voted one of Cleveland’s best breweries! Situated just a mile and a half north of us on West 25th, Bookhouse is the only area brewery to play home to a free lending library.

The books at Bookhouse aren’t just a tacked-on feature. As brewery trends tend to favor an industrial or garage-drinking vibe, Bookhouse has made a point to make their space feel homey and comfortable. The first thing you see on entering isn’t the bar, it’s the dozens of books on the shelves. It feels like drinking in the living room of a really well-read uncle.

There’s a long and proud history of breweries operating in Cleveland, and Bookhouse fits into that history nicely. As German and Bohemian immigrants poured into Cleveland in the mid-19th century, they brought with them their brewing traditions, opening up many breweries in the St. Clair Superior and Ohio City neighborhoods. One of them was the Jacob Baehr Brewery, an unfortunately short-lived operation that, according to Bookhouse’s website, “only employed churchgoing men and only served temperate drinkers.” That building today plays host to Bookhouse, and they’ve even been able to keep the original brick, wallpaper, and tin!