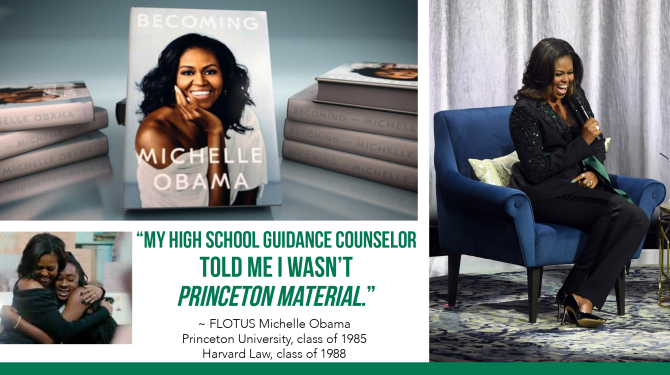 In what is being heralded as the best-selling memoir of all time, FLOTUS Michelle Obama wrote that her high school guidance counselor told her she “wasn’t Princeton Material.”

Rather than let the opinion of an adult defeat her, the encounter became one of several defining moments in her life.

“Obviously, it worked out okay,” the Princeton and Harvard Law graduate said in her documentary, but added “I’m still a little salty,” earning her laughs from the audience.

It’s that very authentic and honest approach to storytelling that made her memoir so compelling to adult learners at Seeds. A year ago, a copy of her book was donated to Seeds East, where it was immediately scooped up by Site Coordinator Kara Krawiec who thought her book club students might enjoy it.

For the past year, the club has met almost every week, reading aloud and discussing the incredible journey of the first African American First Lady of the United States.

With just 45 pages left, they had almost completed Becoming when COVID-19 hit, closing the classrooms and pausing their progress. “Except for Rodney Pulley,” Kara said with a chuckle. “He told me he wasn’t waiting — he was just going to keep reading ahead!” She mailed copies to others, and hopes they’ve taken the opportunity to finish it up, too.

When Netflix announced a documentary by the same name, Kara saw it as an opportunity to reconnect with book club members and other students.

One week after it debuted on Netflix, a Virtual Movie Night was held. Nearly a dozen students and tutors logged in to a virtual Seeds living room to view the documentary. Surprisingly, many of the attendees were NOT book club members and hadn’t read the book.

“Everyone really enjoyed being able to hear Michelle’s side of the story, not just Barack’s,” Kara said. “At one point, Michelle says ‘I didn’t want to just be an appendage to his dreams.’ There’s no doubt she succeeded in forging her own path.”

“I was so excited to share this powerful book with everyone, and it was such a wonderful gift to get to share the movie with them, too,” Kara continued. “I  loved every moment of it!”

Each year, Union Home Mortgage recruits more than a hundred summer interns into their L.E.A.D. Internship Program. Program participants are provided with mentors, a variety …