[VIDEO] Who was Guy Fawkes & Why Is the 5th of November Guy Fawkes Day? 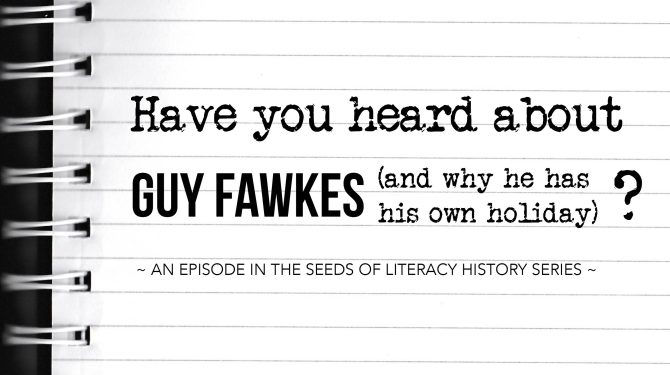 Remember, Remember, the Fifth of November…

That’s the beginning of an old English poem describing one of the world’s most interesting holidays.  November 5th is Guy Fawkes Day.  But who was Guy Fawkes, and why are we supposed to remember him?

Guy Fawkes was born in the English city of York, during a turbulent time in England’s history.  In modern America, you’re free to belong to any religion you want, or not to have any religion at all.  But back in the 1500s, most countries had official religions.

England used to be a Catholic country.  However, in the 1530s, King Henry VIII changed the official religion.  Practically overnight, the entire country switched from being Catholic to Protestant.  This allowed Henry to divorce his wife and remarry, something that he couldn’t do under Catholic law.

Many people didn’t want to change, but there was little they could do while Henry was still King.

When Henry VIII died, he left behind an unstable mess.  His only son, Edward, died when he was only fifteen years old.  He had no children, and English laws only allowed women to take power if there were no male heirs left.  After a short power struggle, Henry’s oldest daughter Mary became the Queen.

And Mary was Catholic.

England changed religions again, returning to Catholicism.  However many Protestants refused.  Those who wouldn’t convert faced harsh punishments such as fines, imprisonment, torture, and even execution.  Queen Mary had so many people killed that she soon earned the nickname Bloody Mary.

Queen Mary died in 1588.  Like her father, she was relatively young.  Her younger half-sister, Elizabeth I, ascended to the throne.  Since Elizabeth was a Protestant, England once again became a Protestant nation.  Unlike Mary, Elizabeth didn’t torture or kill people for refusing to convert, but those who attended Catholic Mass faced steep fines and political punishments.

Catholics disliked Elizabeth.  They made several attempts to assassinate her, but all of them failed.  Unlike her sister, Queen Elizabeth lived a long life, not dying until 1603, almost 50 years after taking power.  After all that time, most people assumed that the fighting was over.

After Elizabeth came King James of Scotland.  His mother, Mary, had been a diehard Catholic.  Many unconverted holdouts assumed he was secretly a Catholic and that he’d return England to the church when he took the throne.  However, that didn’t happen.  James was Protestant and seemed happy to leave religious conflicts behind.

The Catholics were infuriated, and some began scheming about how to replace him.  Doing so meant not just replacing the King, but the Protestant Parliament, too, who would resist the efforts to put a Catholic in King James’ place.

One man, in particular, had a plan.

Robert Catesby noticed that the King visited Parliament once a year.  That was the time to strike.  He hoped that getting rid of both Parliament and the King would kickstart a religious rebellion.  He quickly recruited others, including Guy Fawkes, a war veteran with plenty of experience with explosives.

Their plan, now called the Gunpowder Plot, was to smuggle gunpowder into the Parliament basement.  When King James arrived on November 5th, they’d blow up the building.

The group rented a house across the street from Parliament and dug a tunnel underground.  Once they reached the Parliament basement, they began stockpiling barrels of gunpowder.

However, conspiracy’s like this are hard to keep secret for long.  King James learned about the plot, and ordered new inspections of the building.  Parliament guards found Guy Fawkes in the basement with firewood and long-burning matches.  Further searches uncovered 36 barrels of explosive powder, enough to demolish the building and a significant portion of downtown London.

Fawkes was promptly taken to the royal prison in the Tower of London.  The laws back then offered little protection for those accused of a crime.  Fawkes was tortured until he revealed all of his co-conspirators.  The entire group was rounded up, though some of them died resisting arrest, including the man who started it all, Robert Catesby.

Soon after, all of the conspirators were publically executed for treason.

It wouldn’t have been a surprise if the story ended there.  However, the plot was shocking enough that many churches and government buildings marked the anniversary, ringing bells and offering sermons.  Before long, the date of the Gunpowder Treason became a strange sort of celebration.

People began lighting bonfires to mark the occasion.  Eventually, November the 5th became known as Bonfire Night or Guy Fawkes Day.  During modern celebrations, people make small dolls and mannequins of powerful figures they don’t like, calling them “Guys,” and throwing them into the fire as a form of symbolic protest.

While it might look like an angry mob, but it’s actually a way for people to participate in a fun, energetic way to relieve their frustrations.

So, this year, as you finish your Halloween candy, remember this classic English Rhyme:

Remember, Remember, the fifth of November,

The Gunpowder Treason and Plot

I know of no reason

That the Gunpowder Treason

Should ever be forgot!