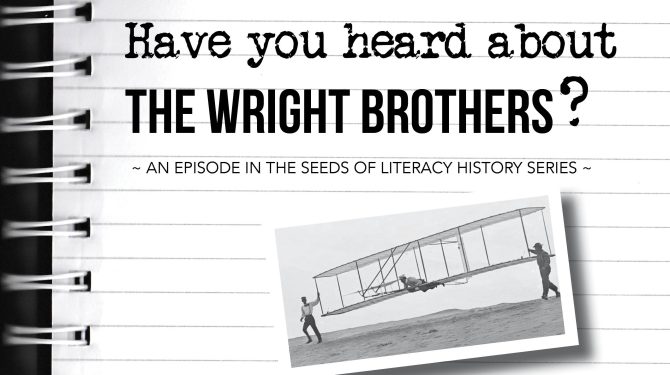 The next time you’re planning a vacation, you might decide to fly to your destination.  These days, most of us take air travel for granted.  But it wasn’t all that long ago that if you needed to get somewhere, your only options were train, horse, or ship.

For many people, human flight sounded like an impossible fantasy.  A common phrase was, “If Man were meant to fly, than God would have given him wings!”

But that all changed on December 17th, 1903, when two brothers from Ohio engineered their way into the history books.

Wilber and Orville Wright were born in Dayton Ohio in the mid-1800s.  Their father was a bishop, while their mother was a skilled craftsman and woodworker.  She taught her children to be good at working with their hands, skills that Wilbur and Orville would put to good use.

Neither of the two brothers finished high school.  Wilbur didn’t finish his final year, while his younger brother Orville dropped out early to start a printing business.  For a short time, they tried their hand running a local newspaper, but that didn’t last very long.

Then, in the late 1800s, America went through a wide-spread bicycle craze.  All across America, people were learning to ride.

The old, large-wheeled penny-farthing bicycles were being replaced by a new design, referred to at the time as the “safety bicycle,” which is essentially the same as modern bikes today.  However, back in the 1800s, they were a major improvement over the older designs.

Wilbur and Orville decided to change professions.  They were good mechanics, and opened a bicycle repair shop in Dayton.  Their shop was successful, but it wasn’t long before their eyes turned upward.

Inspired by a German engineer named Otto Lilienthal, who was pioneering human gliders, the Wright brothers dreamed of building a machine that could fly all on its own.

Of course, they weren’t the only ones trying to invent a flying machine.  Many people had tried, and failed, to defeat the pull of gravity.  Crash after crash made some people believe that powered flight was impossible.  These crashes happened when the pilots lost control of their machines and crashed into the ground.  Those who continued working on it attempted to make their aircraft more and more stable.

The Wright Brothers had a different idea.  They didn’t care how stable the plane was, they wanted it to be easy to control.  If they could control their flying machine, they could steer their way out of any potential crashes.

Looking up, the brothers observed how birds roll in the air to turn, and how bicycle riders bank to change direction.  The brothers used this understanding of motion to guide their design, building a craft that was easy for its pilot to roll and steer.

Because the competition was so fierce, the Wright brothers needed privacy to finish their design.  They also needed a safe place to crash if something went wrong.  They found both in a little-used stretch of beach in North Carolina, called Kitty Hawk. The brothers shipped their machine down to Kitty Hawk by train and assembled it on the beach.  They called it the Wright Flyer.

On December 17th, 1903, they flipped a coin to decide who would pilot their experiment.  Orville won, and at 10:35 a.m., he engaged the engine.  With a steady putter, the propeller cut through the air.  The machine moved forward.  Then, quite suddenly, the Wright Flyer lived up to its name, leaving the ground for a total of twelve seconds, traveling a distance of 120 feet.

That might not sound like much, but it was the first time instance of powered flight.  The Wright brothers quickly went to work improving their machine.  Within a few years, they were able to stay in the air for more than half an hour at a time, traveling at significantly faster speeds.

Within a couple of decades, planes were large enough, and fast enough, that they began to take on passengers.  It took ships nearly a week to cross the Atlantic Ocean, but planes could do it in less than a day.  By 1969, less than 70 years after the first powered flight, advances in technology allowed humans to travel safely to the moon and back.

Today, the Wright Brothers’ original Flyer is at the Smithsonian Museum in Washington DC, or you can see one of their later improved models on display in Dayton, Ohio.  But if you want to see the Wright Brothers’ real legacy, just look up when you hear the sound of jet engine.

There’s a common phrase people say to mean that anything is possible, “the Sky is the limit.”  But the Wright Brothers proved that not even that is an end of what’s possible.