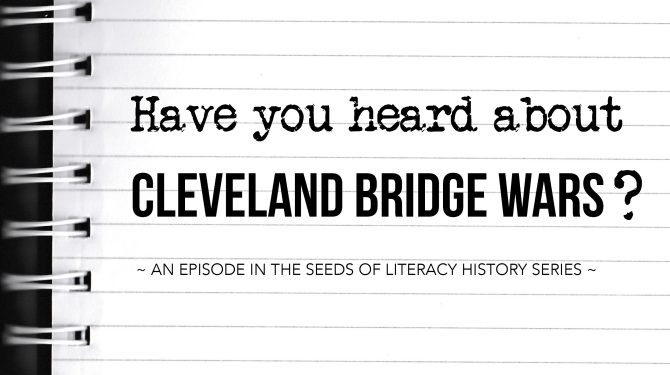 For most Clevelanders, crossing the Cuyahoga River is something that we do all the time.  But not-that-long-ago, crossing the River was a major undertaking.  In fact, control over where people crossed the river was so important that, back in 1836, more than two thousand people took to the streets to fight over how people get across.

Today, we’re going to look back at one of the strangest stories in Cleveland’s history.

The City of Cleveland was first surveyed by Moses Cleveland in 1796.  In the early 1800s, it was a fast-growing town that served as a supply post for the American Navy during the War of 1812.

But Cleveland was not the only growing town on the shores of the Cuyahoga.  On the west bank, there was another growing community: Ohio City.

For a time, both towns grew together.  However, tensions flared up when, in 1832, the Erie Canal was extended to connect to the Cuyahoga River’s eastern bank.  This opened Cleveland to lots of shipping cargo and trade.  Now, to transport those goods further west, you still had to cross the river and pass through Ohio City, because the best way across was a floating pontoon bridge that connected the two cities.

However, it soon became clear that the pontoon bridge couldn’t keep up.  Pontoons are essentially a piece of bridge built on top of a large raft.  They’re difficult to maintain, can only accommodate a limited amount of traffic, and are susceptible to whatever the weather conditions are on the river itself.  No one wanted to lose their valuable cargo if the bridge tipped over or was washed downstream.

Residents in both Ohio City and Cleveland began plans for bridges to pass over the river.  Cleveland was able to start building first.  At a cost of $15,000, about half a million dollars today, a group of investors began construction on the Columbus Street Bridge by what was then referred to as Ox Bow Bend.

Cleveland chose that spot to connect travelers to popular toll roads.  However, because it was so far south, travelers would largely be bypassing Ohio City entirely.  The residents of Ohio City quickly realized that this was bad news.  Losing that traffic would be an economic disaster.

Before long, there were calls to build multiple bridges that would connect Ohio City, or to build none at all.  Both ideas were meant to preserve the status quo.  Protesters in Ohio City rallied under the slogan of “Two Bridges or None!”

By the end of October, tempers were boiling over.  There were attempts to sabotage the new bridge with high explosives, but the bridge remained standing.  Ditches were cut into the road to make it harder to pass, but the ditches were filled in.  Soon, it was clear that the only way for Ohio City to rid itself of the problems created by the Bridge, it would need to be destroyed.

The city council got together and formed a formal council of war, and an assault was organized.  On the night of October 31, a group of nearly 1,000 angry citizens stormed towards the bridge.

Cleveland responded to this threat by raising its militia.  They armed themselves with a cannon left over from the War of 1812.  Cleveland’s first mayor, John Willey, attempted to calm the violence, but he was quickly forced to flee when the Ohio City mob pelted him with small rocks and stones.

Almost as suddenly as it had begun, the Bridge War was over.  The residents of Ohio City went home.  Eventually, they would build another bridge, this one where the Center Street Bridge is today.  However, it wasn’t enough to save them: within twenty years, the small city was annexed by its neighbor.

But it’s not hard to imagine how things might be different if the Columbus Street Bridge had been destroyed.  Would Cleveland be just a neighborhood of the larger Ohio City?  Would downtown be on the other side of the river?

So, the next time you’re driving across the Cuyahoga, I encourage you to pause for a moment and remember the rallying cry, “Two Bridges or None!”

When Seeds returned to the Union Club to host the first in-person event in two years, no one was sure what to expect. But it …