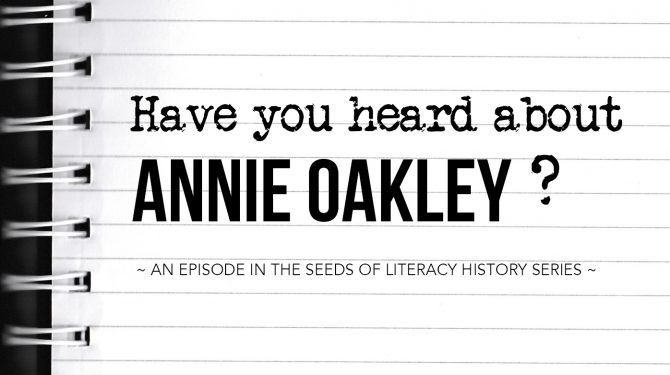 1860 was a bad year in America.  The politics were divided, and by April the following year, the country would be engaged in a violent civil war.  But on August 13, in small a log cabin nestled in the Ohio frontier, a young woman was born who would capture the hearts, minds, and imaginations of millions of people.

I’m speaking of Annie Oakley, the famed sharpshooter who rose to fame for her fantastic marksmanship and a singular ability to excite the crowd.

Born Phoebe Ann Mosley, Annie was the sixth of nine children.  Her father died when she was young, and poverty kept her out of school.  While still a child, Annie was hired by a neighboring family to live with them and care for their infant son.  However, the family was cruel and abusive, and rarely paid Annie the 50 cents a week that she’d been promised.  After enduring two years of abuse, she ran away and returned home.

At the same time, Annie developed her skills at hunting and trapping, selling her wares to neighbors and nearby businesses.  Soon, she was proficient enough to supply game meat to several local restaurants.  By the time she was 15 years old, Annie earned enough from her shooting that she helped her mother pay of their home’s mortgage.

A few years later, a traveling marksmen named Frank Butler arrived in Cincinnati.  There, he boasted that he could outshoot any challengers who could be found, and he put up $100 of his own money to encourage people to try.  Of course, $100 isn’t a bad prize today, but back in 1875 it was worth a lot more.  Adjusted for today’s prices, that would be worth nearly $2,000 in today’s money.

A local hotel owner arranged for Annie to compete for the prize.  She dueled Frank, and impressed everyone with her remarkable abilities.  They competed for a grueling 25 rounds, but Annie eventually emerged as the winner.  Frank Butler didn’t take the loss very hard.  Instead, he began to court the young woman who’d beaten him, and they were married a year later in 1882.

The new couple began to perform together.  Annie began using the stage name of Oakley, and soon they were recruited into Buffalo Bill’s Wild West Show.  For a time, people called her “Little Sure Shot,” but it wasn’t long before her skill and popularity made the name Annie Oakley a household name.   Annie traveled with the group when they toured Europe, where she performed for Queen Victoria of England, Keiser Wilhelm II of Germany, and other notable figures.

Oakley’s talents were both as astounding as they were thrilling.  She could shoot the ashes off of a cigarette held in a person’s mouth, hit a dime that had been tossed into the air, and could even cut a playing card in half from 30 paces.  When the card was placed sideways.

Over the years, injuries would require Oakley to stop being quite as active, but she never totally retired.  Thomas Edison filmed her in one of the first movies ever made.  Later, even at the ripe age of 62, Annie was still setting new sharpshooting records, such as hitting 100 clay pigeons from a distance of 16 yards.  A car accident in 1922 forced her to wear a steel brace on her leg, but she continued shooting even after that.

Sadly, Annie’s health continued to decline.  In 1925, she died of anemia in her home in Greenville Ohio.  She was still married to Frank Butler, who was so distraught at her passing that he stopped eating.  He died less than a month later.  The two were buried together on Thanksgiving Day, 44 years after the day they’d met.

Oakley lived a life of rare fame and glory.  Her undeniable talent and impressive showmanship made her a national celebrity at a time before Youtube, television, or telephones even existed, which made her fame even more impressive.

To this day, Annie Oakley remains a household name.  Not bad for a poor kid from the sticks of Ohio.

WATCH OTHER VIDEOS IN THE HAVE YOU HEARD HISTORICAL SERIES