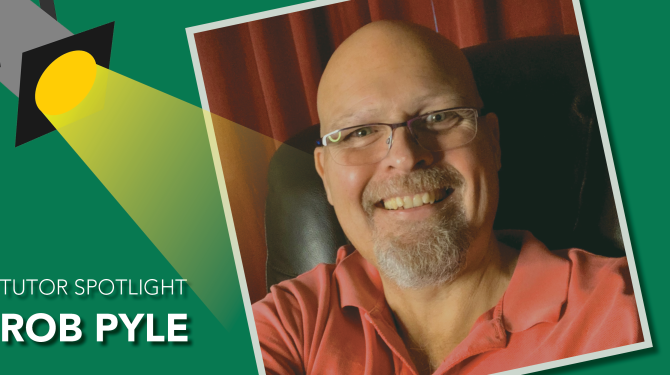 Michigan resident Rob Pyle works as an engineering supervisor at Ford, but in his spare time, he promotes a unique tutoring program in Ohio.

He is a member of several GED support groups on Facebook and Reddit, walking students through tricky math problems and often interacting with adults who would benefit from the one-to-one experience Seeds has to offer. His recommendations caught the attention of staff at Seeds.

“When I told him our communications director wanted to talk to him, he recognized her online handle right away,” laughed Melina Lindsey, a site coordinator at Seeds.

Rob used to tutor locally in Michigan, but his program there closed due COVID. That program’s loss was a huge gain for Seeds, and gave Rob the flexibility he’d been craving.

“I was looking for more of a drop-in group like Seeds,” he explained.“My previous tutoring experience was with one student, on-site. I had to reserve a three hour time block each week but my student canceled often.” He appreciates that no time is wasted at Seeds because there’s always a student that needs help.

THE BEAUTY IN NUMBERS

He’s a popular tutor among both the staff and students because he has something that’s often in short supply: a love of math. Rob’s an engineer. He’s married to an engineer. His two children are engineers. Math might as well be a requirement in his family.

“I enjoy teaching concepts that then make the mechanics of solving problems easier. Getting a student to understand the concepts and reasons behind the equation is the best feeling,” he said. “My goal is to have students enjoy and see the beauty in numbers and math, rather than see math as an impossible foreign language that they will never understand.”

That goal starts the moment he logs in. “I’m continually astounded by the optimism and positivity from the staff,” he said. “I’m always welcomed [to the Virtual Classroom] enthusiastically, and I enjoy watching the coordinators interact with the students and tutors as the [tutor/student] matches are made.”

Rob describes himself as a bit of a math free agent. Sometimes the staff will have a specific student for him to work with. Sometimes they wait for someone to log in who needs math. (They never wait long.) During his first nine months tutoring, he estimates he’s worked with 25 different students.

“He’s always a great sport if we call and ask him if he can volunteer more time if we’re short tutors in the VC,” Melina said. “He’s a math whiz, so I know that any student I pair him with will be in good hands – whether the student is just getting started with Seeds, or is a few days away from taking their math GED test.”

According to Melina, “When a student he worked with twice a week for several months graduated, Rob logged on to our virtual graduation ceremony even though he was on vacation so he could show his support.”

It’s not just the students at Seeds learning from Rob – Rob has learned from Seeds.

Until the tutor training, he had not considered how many people drop out of high school and the shame that many of them experience as a result. Learning how hard many people have it and how hopeless school felt to them as a teen was very eye opening, he admitted.

The training covered a concept that stuck with him: students are often “should” on. Well-meaning teachers, tutors, and family members mistakenly tell students what they SHOULD be doing, rather than trying to understand why the student needs something different. “It’s a good lesson to remember,” he said.

Rob said tutoring is the best thing he’s done in years, and finds fulfillment having a role in helping people believe in themselves and improve their lives. He encourages everyone to give tutoring at Seeds a try. “I bet you’ll find it easier than you fear and more fulfilling than you can even imagine,” he said.

Seeds always needs tutors, both locally at Seeds East and Seeds West in Cleveland, as well as in the Virtual Classroom nation-wide.