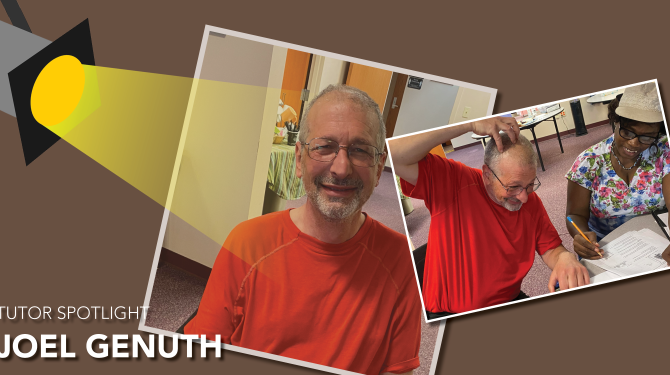 He brings a level of humor to all of his tutoring sessions that is appreciated by the students. “If it isn’t goofy, it isn’t me,” he said.

Before he retired (the first time), Joel was a postdoctoral researcher and adjunct professor in the history of science and science policy; and the co-author of “Structures of Scientific Collaborations” (MIT Press, 2007) — both of which are decidedly un-goofy.

His second career found him teaching secondary mathematics and science, mostly in juvenile detention facilities in the Boston area – while also co-single-parenting his two daughters.

Joel joined Seeds in September 2021 at the urging of his good friend Ed Round. Like Ed, Joel’s a musician. He has been performing classical piano and chamber music with friends for more than two decades.

Because he loved to teach, Seeds was a good choice after his second retirement. He had more success with adults than with children (“despite my best efforts!”).

Almost every morning, he cycles to tutor at Seeds East, jumping into the Virtual Classroom if that’s where he’s needed more.

Although he’s worked with several students multiple times, Joel jokes that he’s “promiscuous” with tutoring, in large part due to his self-admitted lack of punctuality. He often arrives after the start of tutoring time, missing the initial tutor/student pairings. “Kara knows I”m happy to work with anyone,” he said, so it all works out.

He gravitates toward the subjects that the student finds the hardest. “I feel I’m doing them the most good when I’m explaining strategies for learning their most challenging subject,” he said, and working on their hardest subjects is when he learns the most about teaching.

So much of Joel’s thoughtfulness and reflectiveness is tied up with reading — so he says it surprises and delights him to find wonderfully thoughtful and reflective students who don’t read, or haven’t read much. “They teach me to think outside my own box on how to be reflective and I find fun and satisfaction in using their thoughtfulness to motivate and guide them to be better readers,” he explained.

He was surprised to learn that phonics was the best approach to teaching reading to adults. Vice President of Programming Carmine Stewart demonstrated the approach while he observed.

“I look forward to discussions with tutors and staff about how best to help students see structure while they are concentrating on sounding out words,” he said.

“I”m always hoping Carmine will be at Seeds East when I”m there,” he admits. “In addition to knowing her stuff inside-out, her passion and enthusiasm are infectious.”

Joel enjoys his time tutoring because it allows him to “spend time with interesting people, in enjoyable activities, that do the world a bit of good.” He encourages everyone to give tutoring at Seeds a try….”…unless tutoring takes you away from activities that can help more than one person at a time.”

You don’t have to have an educational background like Joel to be a good tutor. New Tutor Training is offered monthly at Seeds and ongoing professional development workshops build on that initial training.

JOEL, ON THE IMPACT OF LOW LITERACY

“Contemporary economies are amazingly impersonal.  I almost never know who is responsible for the stuff I pay for.  And I don’t need to know (or especially want to know) who makes my underpants or puts stuff on store shelves.

Unless a person can provide others with a reason for believing he/she/they can do something that is worth paying for, the world will pass the individual by.