A Reason to Smile | First Graduate of the “Class of COVID” 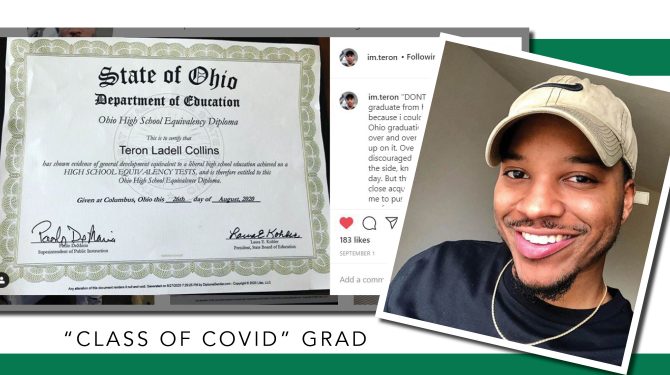 Teron Collins was hesitant to post the photo of his HSE certificate on Instagram, but he did it anyway. He knew that his story could inspire others who might be in the same situation he was in just a few, short months ago.

“The GED was the last thing I wanted to do because I WENT to high school for FOUR years and ONE test prevented me from earning a diploma,” he explained.

Teron attended East High School in Cleveland and had the credits to graduate in 2010. He just couldn’t pass a necessary science exam. Filled with frustration and discouragement, he gave up on the test and told himself it didn’t matter that he never received a diploma…even if it was one he had otherwise rightfully earned.

Teron’s support system of family and friends understood his frustrations, but kept pushing him to let go of the stigma sometimes associated with the GED. Fearful that he’d been out of school too long to succeed, he reluctantly began to consider it.

“I pushed past my fears. I put aside my doubts and my frustrations, and told myself I am gonna do this thing!” he said.

In late June, ten years after he should have graduated high school, he attended virtual orientation and immediately started connecting with the tutors.

Teron spent the majority of his time studying math and science with Jenny Rosenberg. “I love her so much,” he said. “She smiled the whole time and was so encouraging. She helped me see I was looking too deeply into the questions. She was the only person to ever tell me the answers are in the questions if you know how to look. She gave me lots of little gems that helped look at the problems differently.”

Jenny wasn’t his only tutor, though. “They were such a blessing. They’re all amazing and different with their approaches to tutoring. I worked with several until I found the one that was right for me.”

Teron and Jenny often went over their budgeted tutoring time, “because that’s how much she cared,” he said. He even connected with her by text and email a few times. “I don’t know if that’s allowed,” he confessed, “but her willingness helped me so much.”

Were there times he wanted to give up? Absolutely, he admits. But there were always people to encourage him to keep going. “[Site Coordinator] Kara [Krawiec] is so sweet. She encourages you in a way that you just can’t help yourself but to learn. You do it for her.”

Teron passed his first test in July and took the remaining three in August, becoming the first Seeds of Literacy student to graduate without ever stepping foot in the classroom! He enrolled after the physical sites closed and graduated before they reopened.

And that’s not all. He works at Starbucks, a company that will pay 100% of an employee’s tuition at Arizona State University online. He’ll start pursuing his bachelor’s degree in Religious Studies right away. “There are many opportunities for Christians with this degree, so I’m honestly not sure what I want to do just yet. All I know is that I want to share my faith with others, and learn about their faiths. I want to pursue humanitarian efforts and make a difference.”

After posting his certificate pic online, he’s already making a difference. He’s received numerous direct messages from other adults curious about how he did it, and he’s more than happy to send them to Seeds.

“I tell them no matter how hard, how challenging, DON’T GIVE UP. Be encouraged. Move forward. Get with Seeds for great tutors. Don’t rush, take your time. Have people around you who can keep you going. If you don’t have that, Seeds will be that support for you.”