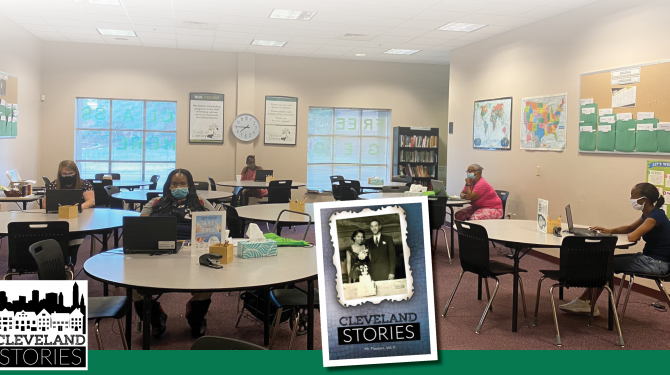 Last summer, she was encouraged, cajoled, and begged to participate fully in something wildly outside of her comfort zone.

Last summer, she attended faithfully and she contributed thoughtfully to discussions.

This year, the 61-year-old student at Seeds has become a prolific, published, writer of poetry —and gained incredible confidence— as part of Cleveland Stories.

Now it its second year, the series of place-based writing workshops — for those who live, work, or have ties to Mt. Pleasant and surrounding communities — was presented as part of the Inkubator Conference by Literary Cleveland. Seeds again played a major role in the project, providing participants and contributors from its pool of students and tutors.

At the end of the workshop, a launch party was (virtually) held for the resulting book, Cleveland Stories, Volume II. The anthology featured writing produced during the writing workshops. Seeds hosted socially-distanced contributors for a live reading of their work, streamed to an online audience.

Remembering the crowded room from the first year’s launch, “The outpouring of praise from the audience made it such a loving event,” said Charlotte Morgan, workshop leader, published author, and educator at Cleveland State University. She insisted the virtual audience show the presenters just as much love as they would have had everyone been together in one room.

“Cleveland Stories is one of the finest things I’ve been involved with,” she continued. “I’ve seen lives changed as a result of being published.”

The event was recorded and can be viewed in its 45-minute entirety here. https://www.facebook.com/litcleveland/videos/567523780597386/?extid=CymJM4sBOdf5vQ2t

Check out the works written by Seeds contributors:

Special thanks to Mt. Pleasant Now Development Corporation for granting special access to the closed building for Seeds to host the socially- distanced readings.

On-Site Learning Resumes for New Fiscal Year May 5, 2021 (Cleveland) – “It has been a challenging year, to say the least,” President & CEO …