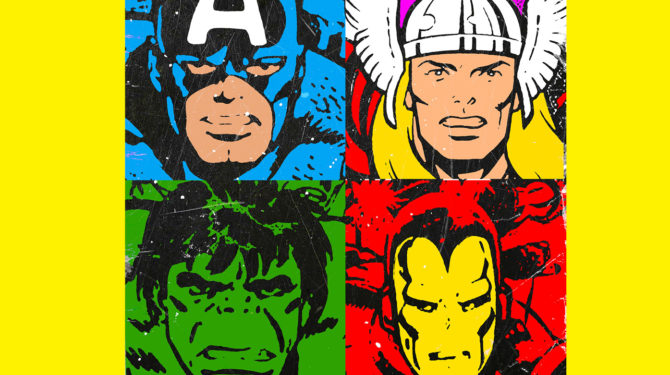 The release of the latest Avengers movie is a social event. Tens of millions will share in the excitement in a single weekend, uniting people from across the world.  But while audiences fill the multiplex, its easy to overlook that a large part of the reason for this success is that these characters, painted in primary colors, draped in spandex, have had a big impact on their lives. One might not think that a blockbuster like this has anything to do with literacy at all, but that’s simply not true.

People have used drawings to tell stories for a very long time. From cave walls to pictographs, visual storytelling has always been an integral part of human culture. Comics are one of the newer examples of this, and they’re an important one.

Most people take them for granted, little more than silly stories for children. However, comics have actually played an important part in literacy in the modern world. With their bright images and splashy pages, comics are an inviting way to get children reading. The heroes found in the pages of Marvel or DC comics are uniquely engaging, and both children and adults can enjoy a measure of wish-fulfillment in these larger-than-life characters. You don’t have to talk kids into reading comics; they’re naturally drawn to the fast-paced action and thrilling adventures. Even in black-and-white, these stories can pack a punch. Many people’s first memories of reading a newspaper involved pulling it open to the comics page, where they were entertained one or two panels at a time. In this way, comics serve as a gateway drug to literacy.

Now, you may think that comic books’ ability to help children read is a simple thing, little more than childish stories and silly adventures. However, you shouldn’t discount just how far a comic can carry readers forward.

Consider words like juggernaut, onslaught, mystique, colossus, or bastion. They sound like a list of words to study for the SAT, but any youngster reading Marvel comics would recognize them as the names of various characters. These codenames often directly link up with the skills, abilities, or personality of whoever they describe, giving even very young children an excellent primer on demanding vocabulary. Characters gain super powers that allow them to control electro-magnetic waves, kinetic energy, symbiotic relationships, and interstellar wormholes, introducing children to concepts they might not otherwise see until high school or college. Understanding a comic book can actually involve quite a lot of learning, and can broaden a child’s mind.

Difficult Topics In a Safe Environment

However, the positive effects of comics stretch well-beyond vocabulary. Comics allow young readers to learn about difficult topics in a safe environment, preparing them for the complex world around them. One need look no further than Spider-Man to see how this works. Spider-Man has tremendous super powers, but he has to keep his identity a secret. In everyday life, Peter Parker can’t rely on his Spider-Man powers to solve his problems. He struggles with school, with girls, with bullies, and he’s also an orphan. Just because he can climb up walls doesn’t mean he has it easy.

Young people can relate to Peter Parker on a very personal level, and for a wide array of personal problems. They can be thrilled by his daring heroics against villains like Dr. Octopus and Carnage (another great vocabulary word), while also experiencing emotional catharsis as they watch Peter struggle with the same everyday problems they’re dealing with.

Comic books were one of the first popular mediums to address topics like prejudice and racism. Characters like the X-Men are hated and mistreated by society. Children who have been victims of racism or abuse can relate to this motley collection of outcasts, brought together because society has cast them out.

Furthermore, comics featured strong female characters even when movies, novels, and radio shows did not. Since 1941, Wonder Woman has traveled the world, serving as an inspiration to girls everywhere. Her appearance as a feminist icon is not accidental. The man who created her, psychologist William Marston, thought that women deserved to have a role model that they could look up to. He wanted a hero whose strength was matched by her compassion, whose tenacity was paired with a sense of justice. He used comics as the way to tell these stories, and many other powerful women have followed in Wonder Woman’s footsteps. Just recently, the movie Captain Marvel (about super-powered heroine Carol Danvers) made more than a billion dollars at the box office, showing just how powerful and influential an icon she can be (While Ms. Danvers has been around for a long time, her promotion to Captain is fairly recent. Older readers might remember her as “Ms. Marvel” in the 70s, 80s, and 90s).

Even the disabled have a superheroes they can relate to. Matt Murdoch may be merely a mediocre lawyer by day, but he’s a savvy vigilante known as Daredevil when the sun goes down.

Of course, not all comic books are about superheroes. You may have heard the term “graphic novel” used to describe certain comics, and it’s not just a marketing term. These are comics with stories designed for adult readers, and they use a mixture of visual images and written words to tell powerful, emotional stories.

An excellent example is Maus, which examines the experiences of Polish Jews during the holocaust. Maus handles weighty ideas about guilt, loss, and racism. The graphic novel V for Vendetta looks at the politics of terrorism and the government efforts to combat it can erode the very freedoms they’re trying to protect. Or one could read Fun Home, a graphic novel and memoir that creator Alison Bechdel used to explore her childhood, her struggle with her sexual identity, and the difficult relationship she had with her father.

These are all stories that might sound more at home in a traditional novel or memoir, but comics serve as a unique way to tell each story, allowing the writer to balance images and prose in a way that sends a clear, specific message to the reader. Comics, it turns out, can be as diverse as any book.

Comics are an emotionally powerful and deeply personal way to tell a story. From the newspaper funny pages to graphic novels, comics can be a constant source of your literary entertainment and joy. While many people leave comics behind when they get older, the continued success of movies based off those comics show that the affection is life-long. It might be time for you to head back to your local library or comic book store to pick one up for old time’s sake. If you do, you might be surprised by just how much is packed inside.