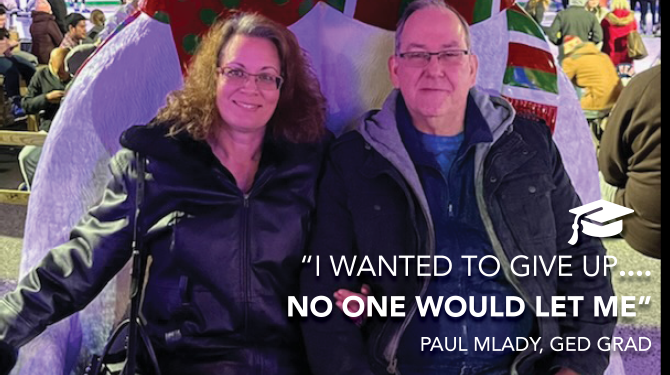 “If every education program was run the same way as Seeds, there’d be no dropout rate in this country. The one-to-one attention, the obvious caring, these are the things that make a huge difference.”

“Some students need more individual attention, and I was one of them, ” said 2017 GED grad Paul Mlady   “ The teachers I had growing up were unwilling or unable to give that attention, or recognize I needed it.”

Paul had been working since he was 12 years old, running his own lawn and snow removal service. By the 9th grade, he had an entire neighborhood crew and steady customers, so he dropped out of school and focused on his business.

Eventually he attended college, auditing classes since he couldn’t actually enroll or graduate without a high school diploma or GED. He even completed enough credits to have earned a degree in criminal justice.

“I was ashamed of not graduating,” he remembers. “And I was really scared my employers would find out. I hated lying on my applications.” Paul also knew that a better paying job would actually check his background before hiring him. If he wanted to improve his financial future for his family, he needed his GED.

Paul has 6 children – the oldest is now 38. “I got all 6 through school. They encouraged me to go back…Said they wouldn’t accept me giving them a hard time about their education if I didn’t finish my own.”  He couldn’t argue with that.

With the support of his family, a hope for better finances, and a healthy fear of losing his job, Paul committed himself to earning his GED. He tried 4 other programs before finding Seeds.

“They were HORRIBLE,” he said. “For the people running those programs, it was just a job. They didn’t really care. If I didn’t catch on fast enough, it was clear that I was bothering them asking questions. I felt like I couldn’t speak up.”

By then he was frustrated – and his wife knew it. If not for her, his GED journey might have ended there. But she saw Seeds on the news, and he reluctantly agreed to give one last program a try… for her.

“I dragged myself down to Seeds West only to find out I couldn’t start that day” he said, referring to the orientation process and placement TABE assessments (Test of Basic Adult Education). Although he understood they were necessary and important steps to enroll at Seeds, it only added to his frustration hearing he would have to come back another day.

But since he was already in the building, Site Coordinator Chris Richards showed him around and explained how the program works. That changed everything.

“I noticed it right away. It was different. It wasn’t like those other places I tried,” he said. “The one-to-one was the first thing I saw and it felt different.”

He might not have come back to orientation if not for the individual attention he received on that very first visit. But it was enough.  He came to tutoring every day, logging 595 lifetime instructional hours in pursuit of the GED.

Paul used to tell everyone that once he passed Math, he’d knock out the other three subjects inside of a week. But like many students, Math was a huge struggle.

“There were days that I’d be SO FRUSTRATED and the tutors just would not give up on me. They’d help me find a different way to look at the problem. They stick with you and stick with you until you learn it. They would show me all the milestones I’d already achieved to keep me motivated.”

Former tutor Bob Lyle was one of those tutors. “He pushed and pushed and pushed me,” Paul remembered. “Finally, one day he confided in me that he was joining the priesthood and would be leaving that summer. He pushed because he wanted me to graduate before he left.”

‘The most challenging part about going to Seeds was not giving up (and I wanted to — a lot), but the best part was that no one would let me.”

A lot has changed for Paul since he passed his GED in 2017. He now has a better sales position, and moved forward with more confidence because he’d achieved his goal. The better job led to better finances. He and his wife have paid off their house and they are talking about buying a second home.

But the changes don’t end there. Paul didn’t just change jobs, he changed his entire lifestyle. Once 350 pounds, he said the staff at Seeds won’t recognize him now. He’s shed more than 100 pounds since graduating. He gets up at 4:30am and heads to the gym 5 days a week. Sometimes he also goes after work with his wife.

Paul drinks coffee now. He never did before coming to Seeds, but long hours of studying, the abundant supply of free coffee in the classroom, and tutor Bob made him a believer in the power of caffeine.

Before his work schedule changed, he returned to Seeds. This time as a tutor.

When he’s not at his job in auto sales, the grandkids keep him busy. There are 5 of them now, with a 6th due July 2022. Even though 3 of them live in California, his wife makes sure there are always children around — she runs a licensed daycare out of their home.

He also plays harmonica in a progressive rock and blues band. “We have sat in with some pretty cool musicians in the past,” he said. “But now we just get together and play for fun, all original music, no covers.”

And, on occasion, he enjoys a good glass of whiskey and a nice cigar with the boys.

“It’s cliche, but if I can do it, anyone can do it. I’m not the brightest crayon in the box but I was willing to put in the work. That’s the thing about the people at Seeds. If you’re willing to work, they’re willing to do whatever it takes to help you.“

“My life completely changed because of people like Bob,” Paul said.

“If I ever win the lottery, I’m giving Seeds a huge chunk of the winnings,” Paul declared. “But until then, Seeds needs people of means to keep this program going.”

“I want to give (President & CEO) Bonnie a big hug. Whenever I was at Seeds, I’d see her working so hard, on her phone, running from meeting to meeting,” he continued. “She has the weight of the world on her shoulders keeping Seeds funded and operational. She deserves more than a hug.”