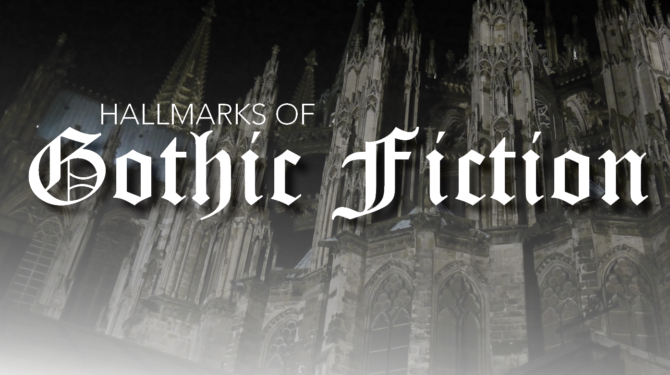 Autumn brings many pleasures: the smell of falling leaves, the delicious taste of pumpkin spice, the sound of giddy trick-or-treaters. But my favorite thing is probably the kind of book it inspires.

Some people look to Stephen King for scares, but I recommend trying something a little bit different this year. Look further back. There’s a wonderful world of literature that most people never experience: Gothic Fiction.

“But isn’t Gothic Fiction just another name for horror?”

It’s actually not. Gothic Fiction is a rich genre that’s been popular for hundreds of years. If you go back to the invention of the printing press, most of the books of that era focused on science, math, and religion. It wasn’t until the 1700s that people started reading for fun. Even then, there was fierce debate over whether or not a generation of young people were frittering away their minds by spending so much time reading.

Gothic Fiction became popular around this time, mixing romantic heroes with ghost stories and supernatural terror. It’s a lot of fun, often featuring exaggerated emotions and a deep-seated fear of the unknown.

A Focus on the Uncanny

Another vital aspect which sets the genre apart is its focus on the uncanny. This term is notoriously difficult to define, but writers of Gothic Fiction have used it to mean something very particular to the genre.

Being uncanny means that something is captivating because it is recognizable, familiar, but also contains some aspect that’s so impossible to fully wrap your head around that it becomes unsettling, or even terrifying.

Vampires are a great example of this. At first blush, Carmilla, the titular vampire who inspired Bram Stoker, appears as a young woman. The novel’s protagonist, Laura, is eager for a companion her own age. Carmilla is attractive, energetic, and charismatic. However, her strange habits create a sense that something about her is…wrong. She refuses to pray with the family, she sleeps throughout the day, and at she’s prone to sleepwalking at night. Also, she bears a mysteriously strong likeness to the old portrait of one of her distant ancestors. On the surface, Carmilla is likeable, even welcoming. But there’s something about her that is undeniably…unnerving.

Gothic Fiction leans heavily on making the reader feel both attracted and afraid. Imagine standing at the edge of a cliff, the tips of your toes dangling over the edge. When you look at the ground, it’s a thousand feet straight down. Like this moment, Gothic Fiction seeks to engage you and unnerve you at the same time.

There are hundreds of books in the genre, and choices that wide are a bit overwhelming. So, allow me to recommend five tales to give you a spooky, giddy thrill this Halloween. Each one is a classic, but taken together they provide a good history of the genre itself.

(1) The Castle of Otranto, Horace Walpole

This is the sine qua non of Gothic Fiction, the original novel that started it all. Manfred is the current Lord of Otranto and his son is about to be wed. However, the wedding is ruined when his son is killed on the day of the event. Manfred becomes obsessed with passing on his bloodline, and is terrified of an ancient prophecy that hints at the death of his family name. Featuring several cases of mistaken identity and with numerous twists & turns, Otranto is almost like A Midsummer Night’s Dream mixed with an Agatha Christie murder mystery, all staged at midnight in a haunted house.

Other works by Poe are more famous (The Raven, The Tell-Tale Heart, The Pit and the Pendulum), but none of them contain as much suspense, terror, and surprise as this story of a man whose growing alcoholism, and an unnaturally persistent feline, is driving him mad.

Not a story for the faint-of-heart, The Black Cat features one of the most exciting climaxes that Poe ever wrote. It’s a perfect example of the Gothic movement: you’ll be disgusted by the main character and horrified by what he does in his drunken state, but it’s impossible not to be drawn so far in that you have to stick around until the shocking finale.

Poe was the master of American Gothic, and few stories you read will stay with you like this.

(3) The Mysteries of Udolpho, Ann Radcliffe

Radcliffe is one of the most important writers in this genre, though her writing sometimes comes off as a bit melodramatic by modern standards. However, there’s no doubt that she crafted stories that continue to speak to audiences to this day.

The Mysteries of Udolpho features a young heroine thrust into mortal peril. Following her widowed father, young Emily St. Aubert travels across Southern France. She soon finds herself at the whims of strangers and distant relations. Courted by rapscallions and scoundrels, secreted away to a hidden castle (the titular Udolpho), and threatened at every turn, Emily is forced to save herself, with some surprising help along the way.

Radcliffe’s stories lean heavily on the romantic aspects of Gothic Fiction with an undeniable flair for the dramatic and a love of nature. The Mysteries of Udolpho is an old-fashioned story, but it manages to be thrilling and warm enough that you probably don’t care that it all seems so familiar.

Northanger Abbey is not only a great example of Gothic Fiction, it’s also a great parody of the genre itself. Part of what makes it fascinating is that it’s so unlike everything else, including other books by Jane Austin. In fact, there are many Austin fans who dislike Northanger Abbey because they’re unfamiliar with the books she’s parodying.

The novel follows the exploits of young Catherine Moreland, who’s traveling to Bath to participate in a series of well-to-do parties and social gatherings. So begins a series of events that leads her to the mysterious Northanger Abbey.

The books plays with many of the tropes of the genre, but unless you’ve read at least one of those books, you may miss some of the humor, as Austin writes with her characteristic subtlety and clever turns of phrase. Northanger Abbey is lighter in tone than the other stories on this list, and it assumes that the reader is familiar with the genre. Still, it’s an undeniable milestone of the genre and an underrated gem.

If you think you know Dracula because you’ve seen one of the many movies based on the novel, you’re wrong. None of the many, many adaptations have done this story justice.

No list of Gothic Fiction is complete without Bram Stoker’s masterpiece. Coming at the end of the Victorian era, it also serves as the last great work of the genre’s zenith. Dracula is truly the epitome of the genre. Splitting time between the then-modern streets of Victorian London and the dark, brooding forests of Romania, Dracula is notoriously creepy, deeply unsettling, and terrific fun.

The novel explores the conflict between the old world and the new, the rise of feminism (or as it was known at the time, “The New Woman”), the tensions between science and spiritualism, and the forces of good vs. evil. Told through diary entries, letters, and transcriptions, the novel effortlessly bounces between the views of more than half-a-dozen characters.

In many ways, Dracula still speaks to conflicts we’re seeing in society today, of tradition vs. modernization, of different cultures looking at one another with fear and mistrust. It does this while also managing to give readers a thrilling adventure. Dracula was not the first vampire novel, but there’s a reason that it’s been so influential in shaping our collective image of what a vampire ought to be.

If you’re only going to read one thing on this list, it should probably be Dracula. You won’t regret it.