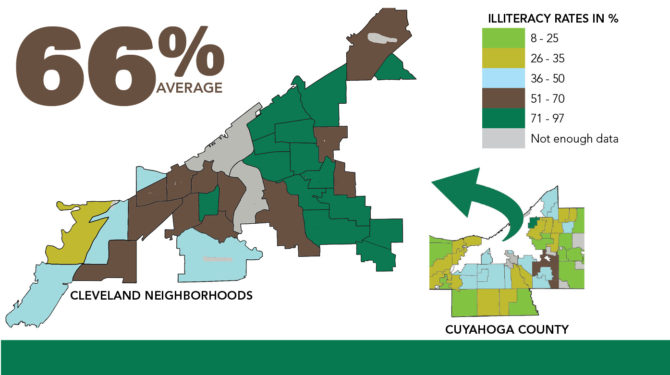 On Thursday, November 29, FreshWater Cleveland distributed an article titled “2 out of 3 Clevelanders are functionally illiterate. So what are we doing about it?”

Some readers called the headline sensationalized, but at Seeds, we call it FACT.

Never Read the Comments? We Do

The readers did. And they commented. Functional illiteracy rates in Cleveland make people uncomfortable, and skeptical about the statistics. They find it difficult to believe this is an issue in their community.

Some readers believed “literacy” to exclusively mean “reading,” when it also includes numeracy, comprehension, and analytical skills. Others were incredulous that Seeds of Literacy had a few students who had actually graduated high school, but still had low literacy skills.

As the story quickly spread online — throughout Greater Cleveland and beyond — the veracity of the data was called into question, particularly the definition of “functional illiteracy” as an accurate description of the two lowest literacy levels  (out of 5) described in the original study.  The age of the study was also mentioned.

Welcoming the challenge and appreciating the attention to the issue, Dr. Carmine Stewart, Seeds of Literacy Program Director, reviewed all of the research from the study to provide clarity.

A Data Desert of Assumptions

Dr. Stewart found the following assumptions were being made in response to the research:

Read Dr. Stewart’s full report: 66% The Source of the Statistic.

The 66% statistic is the absolute best estimate available based on the existing research. The even higher neighborhood estimates (some as high as 95%) hold true for students coming to Seeds, particularly at the Mt. Pleasant/Kinsman Seeds East location. [Statistical Data Cleveland Neighborhoods Handout]

At that location, students have scored at “tenth or eleventh grade levels” on the Test of Adult Basic Education (TABE) but cannot understand the passages they have read, can’t put those passages into their own words; many students can score well and still lack the foundational reading skills, such as using context clues, or even using phonics to sound out unfamiliar words.

Dr. Stewart welcomed the discussion with the skeptics because “It means we are FINALLY talking about something that has been a problem for a very long time.”

2 out of 3 Clevelanders are functionally illiterate. So what are we going to do about it? – FreshWater Cleveland, 11/29/2018

66% The Source of the Statistic – Dr. Carmine Stewart